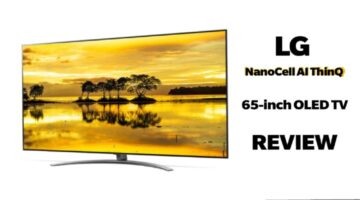 Very few people might have heard about Artificial Intelligence (AI) in TVs, and now almost every budget smartphone has AI in it. The beauty of technology is that as time passes by they start becoming accessible to the common man. Last year LG’s ThinQ was India’s first AI TV that offered an interactive experience and enabled the user to control the different functions in their TV. However, the changes after one year aren’t that significant. We find out precisely how good these new updates are which are carried forward into this year. Are they really magnificent?

How Does It Look?
The emphasis on developing the Nano Cell technology has been huge also keeping in mind that there is no compromise on the TV’s aesthetics. For a 65-inch TV, its wide viewing angles deliver pretty accurate picture quality and the fact that it has Nano bezel further elevates its viewing experience. It also comes with a Bluetooth based Magic Motion Remote that will make you lazier than ever. You can operate it from almost all possible angles and can even speak in it to control different AI-enabled functions. This function is truly tailor-made for individuals who like to get their hands dirty in the kitchen and at the same time watch its recipe on the big TV.

How Does It Perform?
LG’s ThinQ technology enables the user to give voice commands to control your AI-enabled home appliances. LG with the 2nd Gen α (Alpha) 7 processor does a magnificent job in delivering crisp videos with the right amount of clarity and sharpness. It was really difficult to notice any sort of difference when the AI was switched on for video and sound. The difference was barely recognizable. Nevertheless, there are a lot of features like the HDMI 2.1 port which delivered superb response time while gaming along with the in-built Dolby Atmos surround sound gave us an exhilarating experience. The easy access to Netflix and Amazon Prime Video with just a click of a button on the Magic Remote made life easier if I wanted to quickly switch on streaming videos from YouTube or Cable. One more cool feature that impressed me was the TV’s ability to simultaneously show your mobile’s content with your Football match happening in the background. You will never miss a goal!

Verdict
The price is on the steep side, but when you are asking for top-notch features on a TV, you will have to break the bank! Having said that, you will not be disappointed with LG’s Nano Cell technology and the clarity it offers. This Ultra 4K OLED TV from LG will surely be a worthy add-on to your AI smart home appliances.