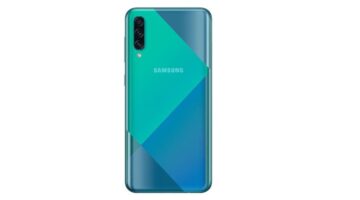 HOW DOES IT FEEL?

First of all, the Galaxy A50s looks similar to the existing Samsung’s mid-range design lineup. The Galaxy A50s also features a glossy and reflective coating that produce hues of different colours. It is even tweaked to include a prism-like design which only accentuates the reflective colours. But due to the glass back, it also attracts fingerprint and we recommend a back case as the phone is a bit slippery. Holding it in hands, the 166 grams Galaxy A50s doesn’t feel heavy and you can easily get used to it. On the front, the 6.4-inch full HD+ display is just amazing, thanks to Samsung’s Super AMOLED panel which produce crisp images. The display is visible under direct sunlight and sAMOLED display are good for power management. There is a tiny notch which Samsung calls it Infinity-U that where the front camera is placed.

The Galaxy A50s is powered by Exynos 9611 processor along with 6GB of RAM and 128GB internal storage. Using this device for a few weeks, we didn’t notice any lag and stutters even for a single time, but it does get warm while playing games like Asphalt 9 and PUBG at high-graphic settings. Samsung runs it’s own One UI based on Android 9 Pie operating system. The One UI features a lot of additional functionalities like themes, UI customization and many more. The Galaxy A50s also comes with an on-screen optical fingerprint sensor. However, the Galaxy A50s fingerprint sensor was the slowest smartphones I ever encountered.

HOW IS THE CAMERA?

The Galaxy A50s feature triple camera setup. The main camera sensor is a 48-megapixel that comes along with an 8-megapixel ultra-wide sensor and 5-megapixel depth sensor. The main sensor captures in 12-megapixel mode, where four adjoining pixels are clubbed as one, but you may also shoot in full 48-megapixel resolution using the pro mode or changing camera settings. The 48MP shots aren’t as crisp though, so you’d be better off with 12MP images. There is a depth sensor which helps in capturing pro mode. The ultra-wide camera offers wide coverage of the 120-degree field of view. It does capture some good shots, but the lens doesn’t support tap to focus. On the front, it features 32-megapixel camera sensor. It takes decent pictures in a bright environment but struggles in low light.

Samsung Galaxy A50s is a fairly good effort by smartphone manufacturer in a segment that is highly competitive. The performance is flawless including gaming. However, we weren’t impressed with the slow fingerprint sensor. Those who love shooting pictures, they are likely to find the device valuable.

Pair it up with Boult Audio SPIRE X