It looks like there is no escape from the vertical form of content. Yes, even on your Smart TVs! YouTube has announced that it will be expanding its Shorts on TV for global users. This means next time you decide to take a break from scrolling through vertical videos on your phone, you will be able to do the same on your television.

Alphabet-owned YouTube is launching Shorts on the big screen with a design that is created to adapt to the TV screen’s form factor. The vertical content will be displayed on the TV screen at the center with white borders surrounding it. The background of the Shorts theme will be based on the main color theme of the YouTube shorts clip. Besides the adaptive background, details of the Shorts like audio details, creator name, like/dislike, and the overflow menu will appear on the side. The company recently shared a blog post where it revealed this new addition to the YouTube Smart TV app.

Much more like the YouTube mobile app, Shorts will not autoplay after one ends and users will have to manually go to the next Shorts by using the remote. The company also revealed that it tested out a number of designs for the Shorts TV layout. One of the designs included multiple Shorts populating the screen at the same time. However, this design was later ruled out as it did not resemble the vibe of Shorts as a whole which features one video at a time. The rejected layout of Shorts was named ‘Jukebox’ style by YouTube. 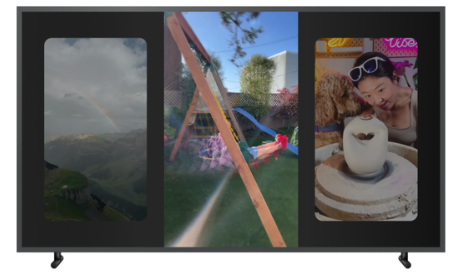 In conclusion, YouTube wrote – “As YouTube continues to make it easier to interact on TV, the richness of the Shorts experience will only grow. Bringing Shorts to TV is a great bridge to bring two of our most important experiences together to benefit both creators and viewers. Over the coming weeks, this experience will be rolling out on TV models (2019 and later) and on newer game consoles. We look forward to hearing your thoughts!”