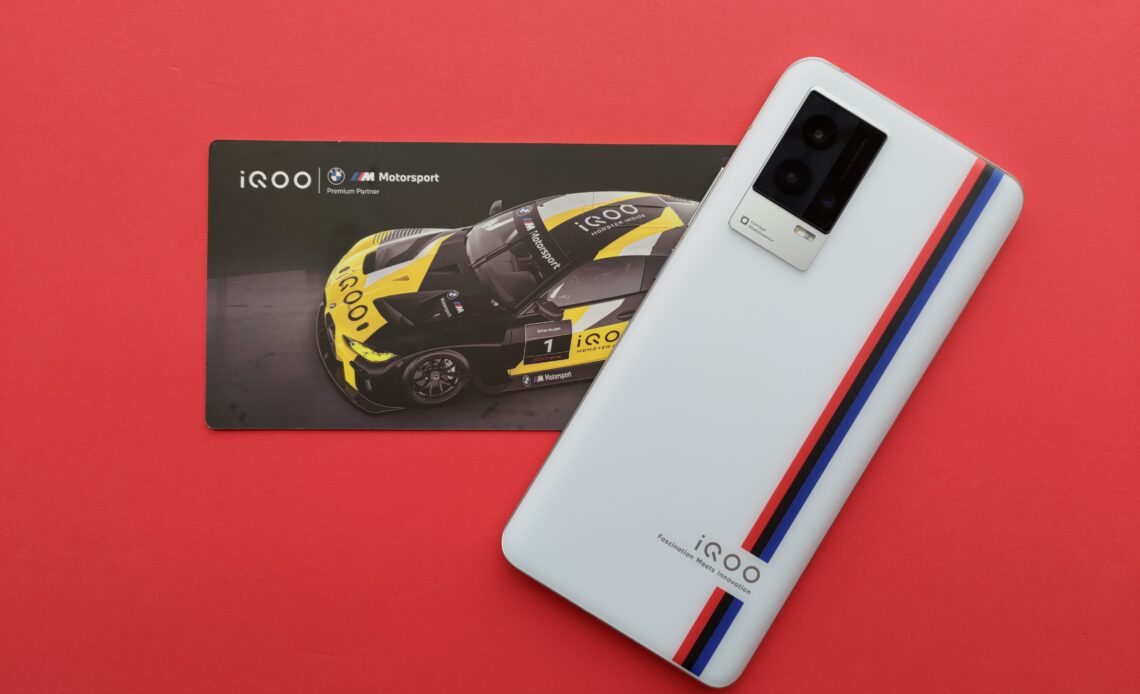 iQOO is a newbie in the world of smartphones, but in just 3-years, the company managed to grab millions of eyes and thousands of customers. Their latest launch, the iQOO 9 series is one of the most awaited flagship series’ in recent times which includes 3-smartphones – iQOO 9 Pro, iQOO 9 and iQOO SE. The one we received for the review was an iQOO 9 – BMW Motorsport Edition, and this is the first iQOO phone I ever used as a primary device. Let me tell you one crucial forte upfront, the iQOO 9 series’ launched in China, and the one launched in India is altogether a separate series of phones in many aspects.

Let’s begin with the packing – the company has made sure to come up with an innovative packing to grab your attention. The box contains a device, a 120W charger, a few other necessary things and yes, a 3.5-mm adapter. The smartphone looks stunning at first sight, and you couldn’t stop yourself from saying, “Wow!”

The phone looks premium, and the one thing that makes you go weak at the knees is its design, particularly the camera module and the rear side that features BMW’s tri-colour stripes. A single look at the iQOO 9, and you would say, oh, finally, somebody’s working on the design and appearance. The smartphone has a 6.56″ punch-hole AMOLED display in the front and is coated with matt gorilla glass at the back, not prone to fingerprints. The iQOO 9 Pro and iQOO 9 have almost similar-looking BMW stripes on the back, but if you look closer, the iQOO 9 Pro has a slightly different shade of white, making it more attractive. The power button brings an absolute charm to the phone as it has a blue-coloured tone. The phone is not massive and can fit into average-sized hands. About the display, it has a pixel density of 398ppi, a refresh rate of 120Hz, and it supports HDR in the Netflix app, which is like a cherry on the top moment.

iQOO has been known to manufacture powerful smartphones such as iQOO Z3, iQOO Z5, iQOO 7, and 7 Legend, but the iQOO 9 series is on another level when it comes to performance. The smartphone runs on a Snapdragon 888+ chip and directly competes with the OnePlus 9 RT. The unit we had for a review was loaded with 12GB RAM and up to 256GB storage.

The smartphone scores 851,613* on AnTuTu but still offers average gaming performance. One can’t play Marvel Future Revolution fluently on this smartphone due to the frame drop issue, but one can have a little fun on low graphics. In the case of Asphalt 9, it runs well and doesn’t cause any trouble. iQOO has claimed the charger will take only 18 minutes and a few other necessary items. Maybe that’s one of the reasons BMW teamed up with the iQOO.

Being the first flagship smartphone from iQOO, we were expecting a lot, but iQOO 9 disappoints us with many elements. The smartphone is priced at ₹42,990 and packs a lot of features, especially when you’re taking a look at the other smartphones from BBK electronics. At first, iQOO seems like a decent and premium smartphone, but you’ll encounter a few troubles on the way. At this price range, other smartphones are available that offer very classy features.