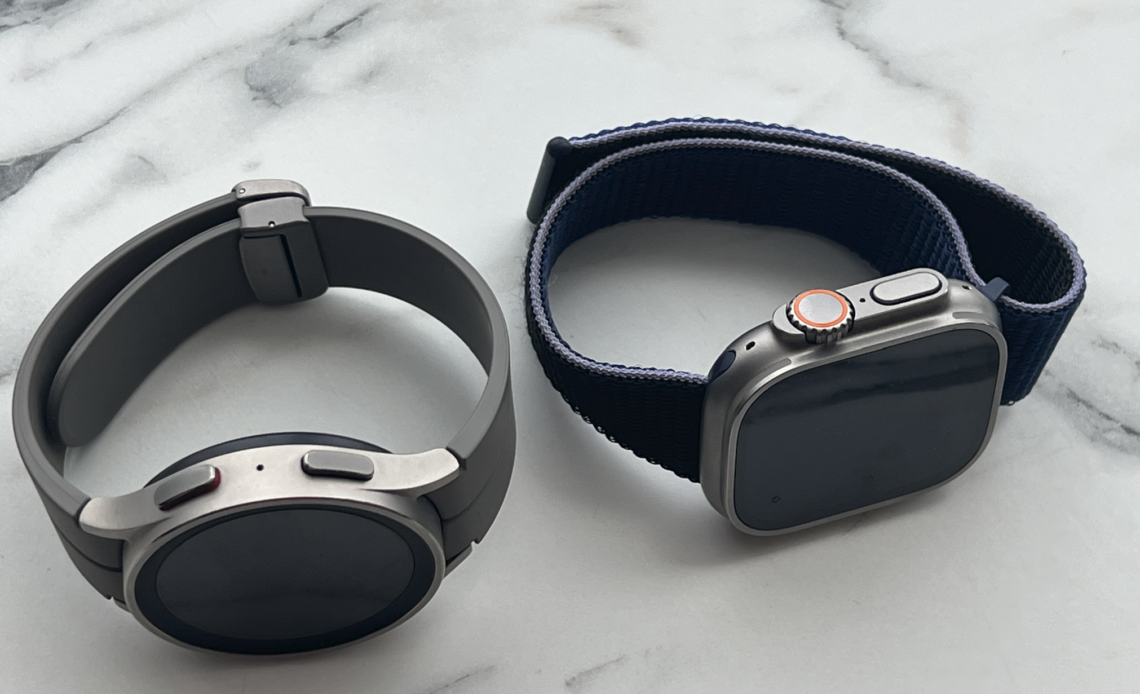 Both the Ultra and Pro come with a rugged design. The Galaxy Watch 5 pro has a 45mm titanium case with a sapphire crystal display. Whereas, the Apple Watch Ultra comes with a bigger 49mm titanium case and a sapphire glass screen. The Apple Watch takes the cake here when it comes to durability. The watch can be taken for a dive! It has water resistance up to the depths of 100m and IPX6 dust resistance. Besides, the Ultra watch can also survive temperatures below zero up to 130 degrees. On the other hand, the Galaxy Watch Ultra only comes with an IP68 rating, meaning it is water resistant up to 50 meters and is not suitable for high-pressure activities. Another additional point to the Apple Watch Ultra for its 86 decibels siren which can be heard from 180m away. One gripe with the Samsung Watch 5 Pro is that it misses out on the rotating dial which was staple to the previous gen Samsung watches. Due to its big form factor, the Apple Watch Ultra registers a lot of accidental touches which could be an issue for many.

Here, the Samsung Watch 5 Pro gets a point for longer battery life with its large 590mAh battery. Samsung claims that the watch can last a user up to 80 hours of typical use. On the other hand, the Ultra battery life is limited to merely 36 hours, and 60 hours with the low power settings activated. If you’re someone who likes to get lost in the wilderness without having to worry about charging your watch then the Samsung Watch 5 pro is the best option for you! While Apple claims that the Watch Ultra comes with a 36-hour battery life, our extended testing of the device resulted in an overall usage of under 24 hours.

Battle of the OS

One cannot skip the software while comparing Samsung and Apple devices. The Watch 5 Pro is powered by Google Wear OS while the Ultra operates on Apple’s own WatchOS, as one would expect. Here, Apple’s boat floats to the shore as WearOS is just not there yet as compared to the Apple experience. The Apple Watch Ultra has better app support as it comes with a far more developed app library as compared to the Wear OS by Google. The WatchOS comes with a slew of fitness and music apps at its disposal and Google’s WearOS has a lot of catching up to you. 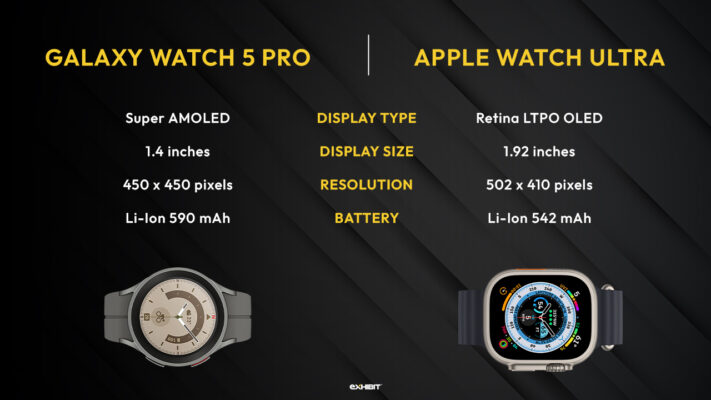 We’ve already discussed the pricing of both of these devices so it ends up being your decision which one you want to go for. The 90K Apple Watch Ultra could be an expensive affair for many to spend on a watch, but Apple has not targeted this product to the everyday joe but for the extreme sports enthusiast. The Watch 5 pro on the other hand is not just for sports enthusiasts but for everyone at a price of 45K.

Both the Apple Watch Ultra and Samsung Watch Pro 5 are some of the best wearable devices in the market right now. However, it ultimately comes down to the user’s preference. The Apple Watch Ultra is undoubtedly the one for heavy users who work up an appetite on the sports ground. Targeted towards extreme sports enthusiasts, the device can prove to be an asset to people who spend majority of their time outdoors. On the other hand, the Samsung Watch 5 Pro with its stylish design is surely a treat to the eyes. The Apple Watch Ultra is a clear winner in this comparison with its extensive features. Whereas, the Samsung Watch 5 Pro is well suited for people looking for a cheaper smart wearable.