The one thing we all seem to be missing right now is travel. While you all are already cooking up plans of where you all will be heading once the pandemic comes to an end – here’s a look at how blissful and chill (literally!) our Iceland visit was. Along that journey, we had the best company – Volvo Cars

Iceland – The name sends an icy chill up your spine. Driving across the Nordic island nation, we were a group of five, covering over 2000 kilometers in 8 days, cocooned in a SUV offering colossal comfort, off-roading capabilities to help up conquer the extreme driving conditions, and a boot to stock up six medium-sized bags along with vegetarian ammunition. Because we were in a country where veggies don’t grow and don’t reach places easily. 356 liters gets converted to 1000 liters with the third row of seats tucked away. Driving a minivan then? Rather, tank crafted by Volvo. The XC90, our comrade for the ICY DRIVE. 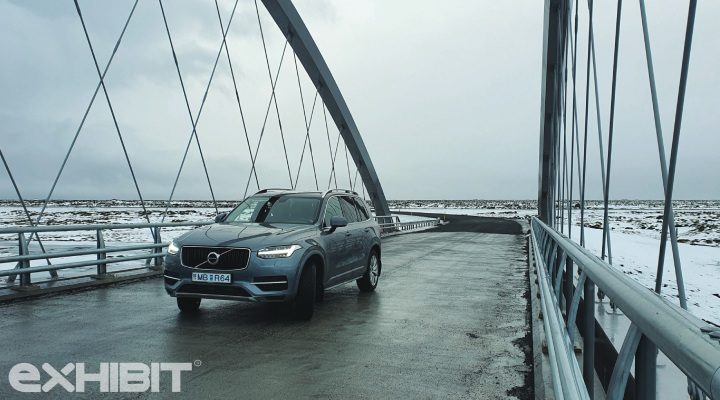 The plan was simple, to drive every day for two to three hours, starting from Reykjavik, checking in and out of hotels, every night. Yes, painful, but the only way to do justice to the mystical landscapes of Iceland. We landed in Reykjavik at 10 in the morning. First stop was the BLUE LAGOON, which is a mere 25-minute drive from the airport, and can take away the worst of jet lags, fatigue, maybe depression and on a serious note, skin diseases like Psoriasis. It’s a preternatural place with snow capped mountains all around and a geothermal hot water in a blue-tinged pool. Your mind and body are so invigoratingly confused as it relaxes every nerve and senses with -5 degrees Celsius temperature above your neck while the remaining part is soaking in warm soothing water rich in salts, algae and silica.
The feeling is surreal, an experience which can not be worded. Gorgeous bikini-clad women around you with friendly smiles, but your mind has already transported into the trance of nature with deep questions of life, death, nature, afterlife and life. Even the staunchest of atheist will start feeling mystical. The next day was the first appreciable drive, 250 kilometers in three hours. The first thing that hit us was no sun until way past 10 AM. When we are used to have the sun shining bright before the clock strikes 7. It’s kind of weird, but eventually we got used to winter sunlight lasting barely 6 hours, from 10 to 5 in the evening. We already had winter tyres on our stallion which are shoes for your car and very different from the regular ones. The main difference being the tread depth, winter tyres have more of it. More importantly, the rubber used to make winter tyres contains a larger percentage of natural rubber and silica in the compound. This doesn’t harden as much as synthetic rubber in cold weather, improving grip and performance. They also have thousands of tiny grooves called sipes in their tread blocks, which are used to disperse water and prevent aqua planing. They perform best in temperatures below 7 degrees Celsius and it’s important to know this, since the deep tread pattern provides a cavity for snow. 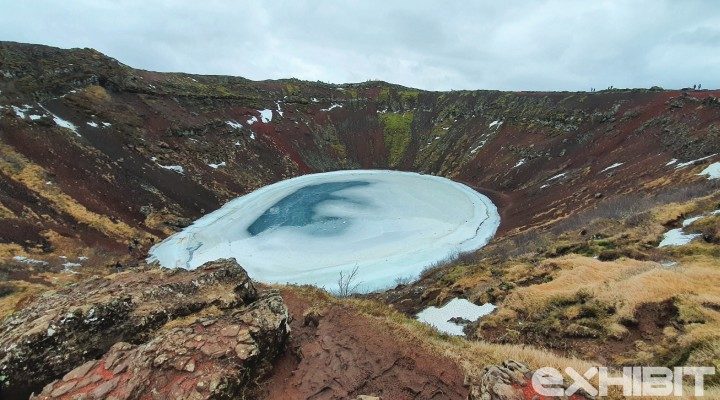 Strangely, nothing grips snow better than snow, and the compacted snow intensifies the grip effect, adding traction to push the Volvo forward on with Volvo XC90 snowy and icy roads. When it wasn’t snowing, it was raining.The roads were narrow and not many cars on it. Headlights had to be left on at all times, and the heated seats kept the fire burning within us to continue.Eyes on the road and follow the tread,one miss and you could skid on thick layers of snow on the sides. And it did happen once. Missed a turn, tried a U,went wider assuming the Volvo will glide over the snow, but mother nature gulped down our tyres. As it happens the more you accelerate the more it got in.It was raining with -4 degree and strong winds. We got down to admire our surroundings, because that was the next best we could have done. The first vehicle which spotted us stopped by. The driver, almost resembling the Icelandic Santa, popped out and smiled. Did you doze off, he asked amusingly. Later we realized, the drives are so scenic and heavenly, with these long, never-ending straights, that people do go to sleep. Together we reversed, shoveled some snow under the tyres to give the 2 tonne XC90 a clear path.That not being enough, two crew members along with the Santa gave it a push to get the wheel sun stuck. One high-five and a big smile later, the Santa was back in his van, not waiting for us to thank him properly. But that’s the nature of Icelandic people, always welcoming, smiling and helpful. We sprinted back and hopped in the Volvo, to cherish the heated seats which felt nothing less than a bonfire during those cold winter nights.

The escapades finally brought us to Diamond Beach, a stunning river wrapped by mountains laid out with big blocks of ice in crystal clear water,almost diamond shaped. We did some off-roading and the adaptive suspension did its part to glide us over. Not getting stuck this time, however the harsh conditions did try to put us down. Wind speeds so penetrating, you could feel the car trembling at times. But the XC90 handled itself very confidently, even when driving at 160 kmph through those treacherous icy conditions. In fact, we had to try our very best to contain the speed within 120 kmph with those clear straight beautifully laid out roads. The warning signs of the Volvo,particularly the three beeps of red light on the windscreen by the driver side whenever you are in the braking distance of another car, made driving more lucid and confidence inspiring. The drives were long but never tiring, and we kept on moving through a trail of beautiful landscapes varying from mountains, ice capped fields, brown rocky fields, horses on your sides, small boutique towns, flowing and frozen streams. 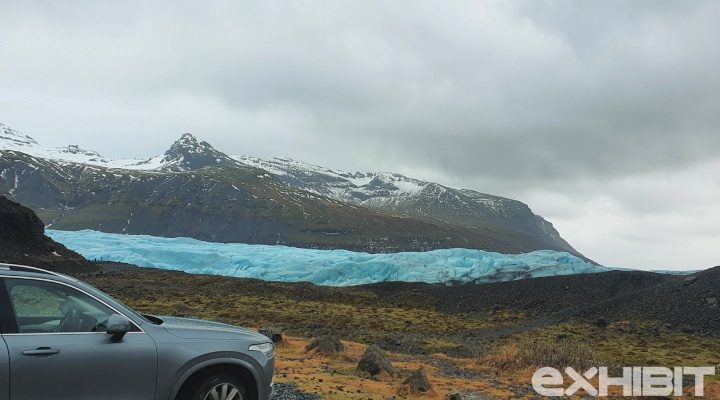 The XC90 drove like a breeze, allowing us to admire the landscapes through the generously sized windows. The scenes were like a Bollywood movie, where the background kept changing on either side of the road. We had music belting out from our boy zone. Bryan Adams through the 12 speaker setup of the Volvo almost transported us inside a movie hall with us being the stars. The immediate fastening of seat belts, whenever we jumped over natural bumps, brought us back from the movie with an assured feeling of extra safety that the Volvos are so famously known for. Morning sights of the XC90 covered with white pure snow was mesmerizing, which we had to destroy with our shovels till we gained enough visibility to drive a few kilometers. Let me admit, it is quite relaxing to gauge out pieces of snow stuck from the windscreens and the doors. Once the car starts driving the snow melts with the engine heat. The washer fluid– which we ensured was refilled, even at the cost of Icelandic mineral water,performed and showed us the way. Our original plan had to be re-thought on day 4, when we looked up the roads (road is the bible of navigation in this island) and realized that the roads to Akureyri, which is the northernmost town of Iceland, is blocked. We could also not cross Egilsstaðir, the small beautiful town in the east with a population of almost 3000 inhabitants. Few housing societies in Mumbai can make that number, but that’s the beauty of Iceland, with a meager population of 370,000 (approx) spread over an area of 103,000 kilometers. We instead went to the Golden Circle to see the Geysier, Secret Lagoon, hop on some snow mobile and chase the northern lights. The Northern Lights is a marvel, just like the XC90, which is in the bucket list of many, You must drive away from Light pollution to see this magical,almost unreal phenomenon where the sky gets covered with green, pink and other divine colors and the atheist in you will die permanently. We went twice and stayed up against the cold winds until 1 AM but the clouds disappointed us, perhaps a reason to go back and chase the northern lights. The drive was epic and the memories are forever frozen in our brains. At the end of the 2000 kilometer trail, the Volvo XC90 – D5, the Momentum edition with a 2-litre engine, had packed everything which you would need from a SUV required to drive through extreme icy conditions, andmore. It boasted of luxury, confidence,and 235bhp@4250rpm of power a tour disposal, to make the Nordic Island journey as resuscitating as soaking in boiling hot waters of the Blue lagoon. A great companion, indeed! 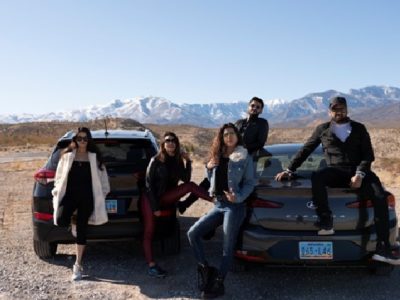 Vegas On Wheelz with Hyundai | The Las Vegas Travelogue

Would you believe that I have been going to Las Vegas for the last 12 years? Thanks to CES! But it always gets ...
By Ramesh SomaniFebruary 4, 2020