Maxing the City at natrax 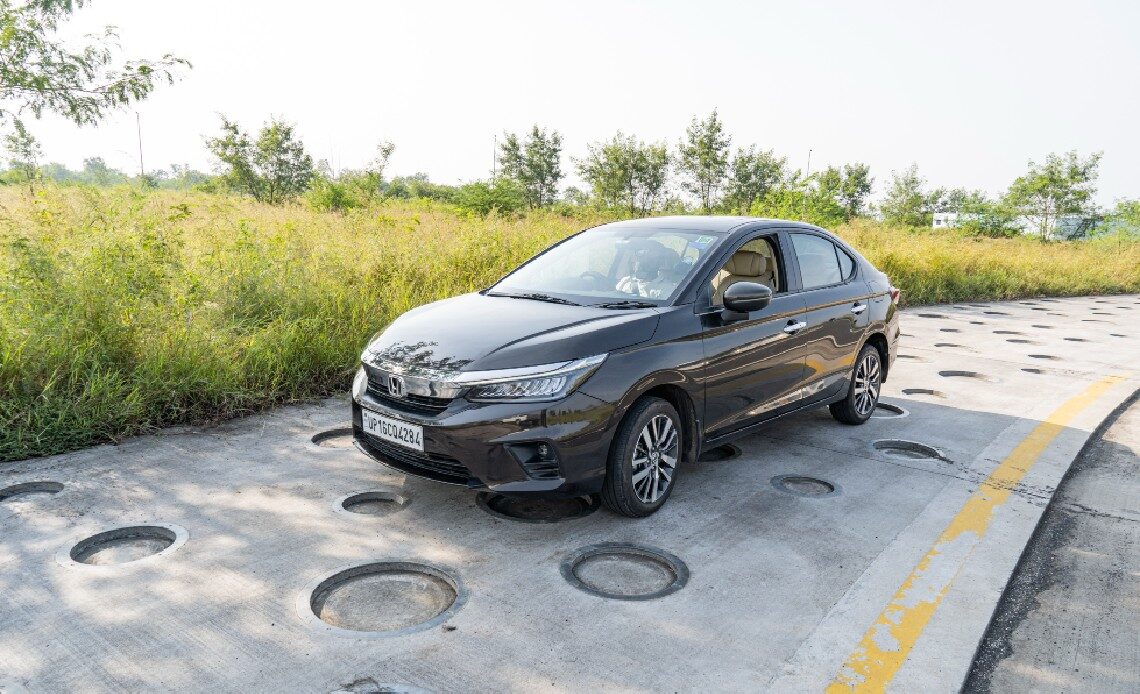 Indore, the cleanest city of the country, has never really excited the auto enthusiasts, but it’s like a turbocharger now and gets the adrenaline pumping and is on the map of all automobile manufacturers and enthusiasts alike. This surge in acceleration for Indore is because of NATRAX – National Automotive Test Tracks – which is about 50 KM from Indore, and the 11.3-km long track is currently the fifth-largest high-speed track in the world. For Auto Manufacturers, it’s a testing facility equipped with all sorts of tracks, but for enthusiasts, the needle stops or instead starts from the high-speed track. Usually, one would like to get their sports car, M or AMG machines and Max them here, but the Excitement of seeing the needle touching those extreme bars and redlining the speedometer is totally diabolic, and going through those parabolic curves is an exhilarating experience.

We had taken the Mercedes AMG GLE 63 S Coupe, which Roshan maxed at 295 km [check our Mercedes story. On the other hand, I wanted to drive a regular sedan and take the needle to the max, and hence zeroed down on a rather familiar Honda City. Will get to the “Why” of it ahead. Before that, Let’s get a reality check – How many of us can afford a Lamborghini, Porsche and the likes? But when you’re at NATRAX, a sudden rise of adrenaline will make you drive your regular sedan like a supercar.

While the Indian market is currently obsessed with all sorts of SUVs, sedans have their unmatched charm and appeal, and whoever said tracks are only made for supercars haven’t risked driving an everyday and affordable sedan on it. We always believe in breaking patterns, and we had an opportunity to break this old-school saying, so we did it most unexpectedly- by driving the Honda City on a high-speed track.

And why not? Honda City is one of the ideal sedans in our country and has been a household name since its first launch in 1998. Honestly, it was the first car that I bought with my hard-earned money, and somewhere I still have an emotional connection with. It’s a decorous sedan that amazed the world with its brilliance, year after year, decade after decade, and emerged as a game-changer. The car is so phenomenally dominant in the Sedan segment that no wonder it stands tall in every car manufacturer’s rival list. The sporty lineup of Honda City has grown tremendously over the years, but for me, the excitement of driving a Honda City remains the same because some things never change. When you are attempting to touch the top speed in an engine which is not meant for race track; you have to be careful with your choice or else anything can happen when revving at such top speed. That’s where you can rely on Japanese engineering.

The 2021 Honda City is 4549 mm long, 1748 mm wide, and 1489 mm tall. The wheelbase of the car hasn’t changed, it’s still at 2600mm, but the 5th-gen Honda City has a 10 mm lower stance than its predecessor, which makes it more suitable for a track experience. The cabin offers an ultra-premium feel and sophisticated vibes along with perfect driving position and adjustable headrests. An important feature to have for parabolic curves of a high-speed track. With the tilt & telescopic steering wheel adjustments and the plush comfortable seats, one can easily get in the right posture no matter how tall or short you are. Again high speed runs on the track guzzles fuel like a thirsty camel in the hot desert.

We picked the car’s petrol variant, which is Water Cooled and powered by an Inline 4 Cylinder i-VTEC DOHC with VTC and throws 89 kW (121 ps) best-in-segment power and 145 Nm torque albeit with a 40-litre fuel tank capacity. The six-speed manual transmission, which features 6 forward speed ratios, and CVT (Continuously Variable Transmission), is the best innovation from Honda. We also wanted a car in a relatively affordable price band of around 15 lakhs on the road. So all of this makes it a perfect choice. Agreed?

The final lap towards the Top Speed

I did the first three laps just to get used to the track, understand the curves and straights, align the car with the track, and make mental notes in my mind. The fourth lap was an attempt to touch 190 km and see how the car behaved, and there I was fully confident to go for the kill. It was the 5th lap which was the one for records. Few checks – A/C off, Camera Mounted on the speedometer, seat belt fastened and I started pushing the pedal hard with all my thrust and engaged my right foot with the accelerator against gravity.

There is a time when you feel like lifting your feet to calm your fast pacing heartbeat, especially in those parabolic curves, but you have to keep reminding yourself against it. One lift-off means whatever you have gained in terms of speed will neutralise. I continued pounding and finally touched 208 km. Maybe had I prevailed more, I could have touched the 212-215 km mark, but it was a hot day. We had been driving the car for continuous laps and just the night before drove it from Mumbai to Indore on stock tyres. But the Honda City played like a true champion in my pursuit to set the records straight and helped me prove a point that, if you are half a good driver and have a trusted sedan, then it can be fun anywhere, even at Asia’s longest high speed track.