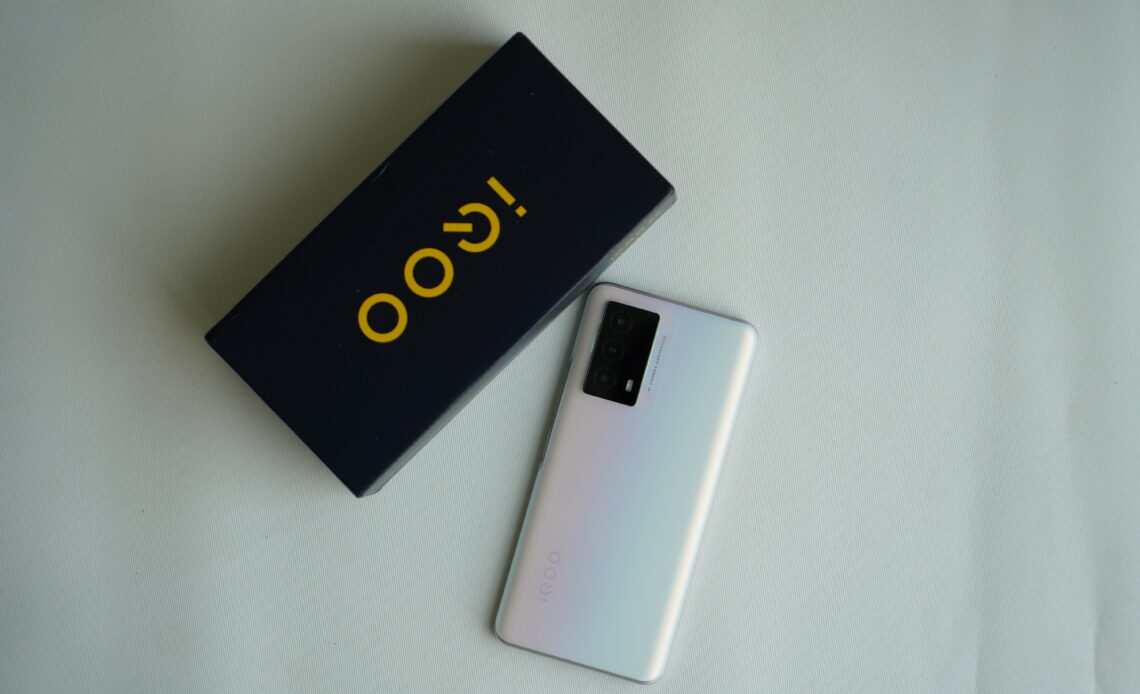 I have been using the IQOO Z5 for two weeks, and never during this time period have I thought of switching it for some other smartphone. Since I am starting my review with this pitch, you must be aware of what’s coming ahead. But wait, it’s not all black and white with this one. IQZOO Z5 is going to be a roller coaster ride!

The 8GB RAM and 128GB ROM variants of this smartphone cost Rs 23,999, whereas the 12GB and 256GB variants will cost you Rs 26,990. There are also a few deals running on the smartphone that can save you a thousand bucks or two.

When I first looked at the smartphone, I thought it had a glass finish at the back, but to my surprise, the IQOO Z5 has a matte finish with a bit of texture. The smartphone has got a premium feel to it with that gradient design and squarish camera. What I liked about Z5 is that it has an excellent weight distribution since it doesn’t feel too heavy in hand, irrespective of the fact that it weighs about 195 grams.

IQOO Z5 comes in two colors; Mystic Space and Arctic Dawn. On the right-hand side of the smartphone, we have a volume rocker and a power on/off button. It has a side-mounted fingerprint sensor that works flawlessly. On the top, we have a headphone jack and a secondary microphone for noise cancellation. At the bottom, we have stereo speakers, which go missing on a lot of premium smartphones.

IQOO Z5 has a 6.67-inch screen and has an IPS LCD instead of an AMOLED display, which instantly snatches away the appeal at some levels. The smartphone has a 120 Hz refresh rate and runs on Android 11, primarily on FunTouch OS version 12. It is powered by the Snapdragon 778G processor. Also, instead of the LPDDR4 RAM, which is most commonly used in smartphones of this range, Z5 uses the expensive and much more power-efficient LPDDR5 RAM, which is why one cannot complain about the performance of this smartphone.

IQOO Z5 uses liquid cooling technology, further reducing the chances of overheating while playing heavy games. I was switching between Call of Duty and Injustice, both highly graphical, constantly between hours, and did not face any performance or overheating issues.

Z5 is backed up with a 5000 mAh battery, and with the Snapdragon 778 chipset, the device becomes quite power-efficient. You also get a 44W fast charger along with a smartphone that can charge the device fully in about an hour.

Now coming to the most crucial part, the camera functionality, that more or less makes the smartphone lead either from the front or from the back in this hyper-competitive market. The smartphone packs a triple camera setup, with the latest 64MP Samsung GW3 Sensor, 8MP wide-angle, and a 2MP Macro Camera. In the normal lighting conditions, I clicked some pretty good pictures.

The primary and the ultra-wide cameras captured colors and skin tones quite well, if not perfectly. On the front, there’s a 16MP punch-hole camera that captures selfies well under normal lighting conditions. Interestingly, the Z5 smartphone offers a camera feature where you can operate both front and rear cameras simultaneously. There are also various modes in which you can click photographs or record videos. In artificial lighting, the device captured some pretty good pictures with natural skin tones.

Honestly, it’s not the best out there but works quite well for the price. If you are all about ‘Made in India’ stuff, you can grab the deal with no regrets.