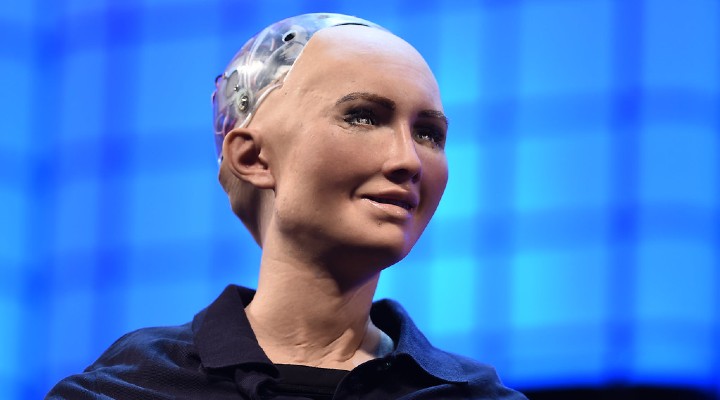 Do you believe everything that you read, hear or see? Is it even the right thing to do? Who would have imagined Issac Asimov’s description of robots will be a thing of future? In the video where Sophia interacts with CNBC’s Andrew Ross Sorkin at a Future Investment Institute panel in Saudi Arabia, it was a giant leap in the field of robotics.

It is rightly said, humans are as creative as they can imagine. Perhaps the only thing that distinguishes us from other animals. What you see today was imagined by someone years ago. For example, the flying machines, tanks are some of the things imagined by the great inventor Leonardo Da-Vinci. You can find so many references to the same in his writings and designs.

If you read about a cyborg from the future or armies made of robots guarding our borders that is a plausible concept. Today, the artificial intelligence (AI) revolution has taken innovation to the next level but it will be unfair to not credit the writers/thinkers who imagined them at the first place.

Let us see some of the characters from the past that came out as an innovation in the present era.

1.K9 from Doctor Who and IBM Deep Blue

The brainchild of writers Bob Baker and Dave Martin K9 is the name of the fictional robotic dog in the long-running British science fiction television series Doctor Who, first appearing in 1977.

The dog was smart enough to defeat his master in the game of chess. Back then it was something that no one had imagined that the same could be possible.

Fast forward to 1996, IBM’s supercomputer Deep Blue defeated champion Garry Kasparov and won its first game against world chess grandmaster. With Grandmaster Joel Benjamin as a part of the development team, Deep Blue was a part of the ChipTest project at Carnegie Mellon University. Its development began in 1985.

Aired from September 23rd, 1962 to March 17th, 1963, Jetsons was way ahead of its time. With high-tech house gadgets, robotic household help and flying vehicles, it was all fictional back then. In an episode, there is the depiction of phone calls accompanied by an image in TV, something that we know as video calls today.

A similar device is available now that we know as Facebook Portal. It is a smart home device built for video calling and coupled with the voice control it is possible to check who’s at the front door, listen to music, watch the news and more.

3.Rosie the Robot Maid from the Jetsons & Tin Cat from Tom and Jerry and iRobot Roomba

One of the criticisms that we commonly hear about AI is that it will take away manual jobs. And the first time we saw this was in Tom and Jerry, where Tom was replaced by a mechanised tin cat. Also, we were fascinated to see something like a robotic household help (Rosie the Robot Maid) in Jetsons. But, back then no one imagined that this can be the future!

iRobot Roomba is a robotic vacuum cleaner that can clean the house with zero human interference. Similar to iRobot Roomba there is Moley Robotic kitchen that can prepare any dish from scratch and then clean afterwards.

Imagine being a polyglot! How cool that would be? Where you interact in the local language where you are visiting. Keeping the same concept in mind, Star Trek’s creators thought of a universal translator. If you think this to be a novel fascination, you should know that the idea was first mentioned in Murray Leinster’s 1945 novella “First Contact”.

However, Star Trek’s Universal Translator is not yet completely available as it operated by scanning brain-wave frequencies and using the results to translate them into words. Captain Kirk used a handheld translator to communicate with the Companion (the cloudlike entity that kept famed scientist Zefram Cochrane alive) in 2267.

A lot has been going on in the technology space in the last few decades. What felt like fiction is only a matter of time to be manifested in reality. So next time you have ideas like teleporting yourself to different location don’t undermine your imagination, maybe someone somewhere is working hard to make that dream come true.