We’re on the edge of the great Indian festive season, and to make most of it, Realme India is holding an event on 13th October to launch Realme GT Neo 2 and Buds Air 2, but according to the recent announcement from the Realme, apart from these two products, the company is also planning to launch a bunch of new AIoT products and the Snapdragon 870-powered smartphone on the same day. Realme’s first accessory to the TVs is said to be India’s first Google TV streaming device. Earlier, it was supposed to be launched on Flipkart during the Big Billion Days Sale, but somehow the company didn’t release the product. The upcoming Smart TV Stick will be available in Black colour and will feature a powerful processor. The product will compete with the likes of the Xiaomi Mi Box 4K and Amazon Fire TV 4K.

The Smart TV Google Stick, based on the Android platform, will come with an HDMI port to connect to your TV, and with this stick, buyers can turn their non-smart TV into a smart TV, or they can upgrade their existing smart TV to get a Google TV experience. The upcoming TV will provide seamless entertainment to its buyers with its built-in entertainment platforms and multiple connectivity options. 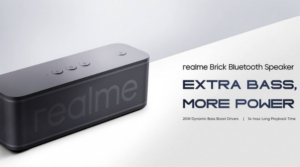 Along with the 4K Smart TV Google TV Stick, Realme will launch its third Bluetooth speaker called the Realme Brick Bluetooth Speaker. The speaker packs a 20W Dynamic Bass Boost Driver, and it offers a long playback time of up to 14-hours along with additional features such as stereo pairing and equalizer presets. The speaker will come with a 5,200 mAh battery, and buyers can pair two Realme Brick Bluetooth Speakers to enjoy a 360-degree stereo sound experience. About gaming accessories, the company will unveil a cooling back clip Neo that offers a rapid cooling solution, while the Type-C SuperDart game cable will empower gamers to play carefree while charging. The Mobile Game Trigger is advertised to “bring reactivity to gamer’s fingertips, and it will help mobile gamers to play better. Lastly, the Realme Buds Air 2 will arrive with a Closer Green colour, but the specs and features will remain the same as earlier.