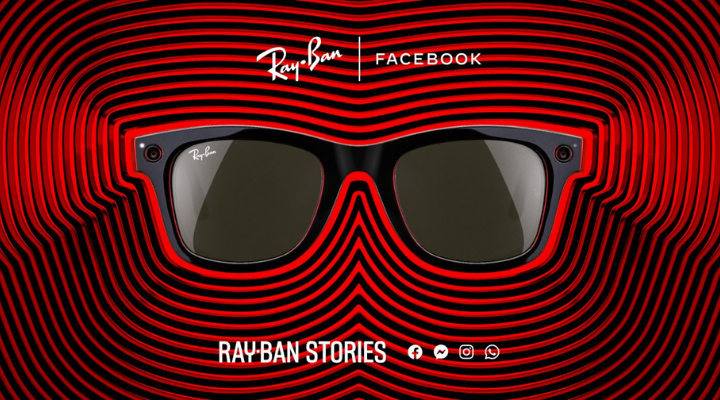 After establishing itself as one of the most popular social media services and ruling the social media world by acquiring WhatsApp and Instagram, Facebook started venturing out for more. And now, the California headquartered company has entered into a world of smart glasses by collaborating with one of the best glass wear companies, Ray-Ban.

The Facebook sunglasses are designed on the iconic Ray-Ban Wayfarer design that first appeared in the late ’80s. The company has named its debut smart glasses as Ray-Ban stories, and these smart glasses are paired with cameras to shoot photos and up to 30 seconds of videos. The sunglasses feature two 5MP cameras, built-in speakers, a touchpad on the temple, three microphones, and a charging case.

The company has taken the necessary precautions to avoid the misuse of smart glasses. The 5MP cameras at the right corner of the eyewear have an LED light to indicate that you are recording someone. Also, you can only record videos for up to 30 seconds which means the smart gadget is made only for the Facebook Stories feature.

One can turn on the camera by pushing the side-framed button, but the images captured by the smart glasses are not high-quality images like those you click on smartphone cameras. The company has developed a dedicated app Facebook View to see photos before you upload them anywhere. The smart glasses have built-in storage for 500+ pictures and around 30 videos.

Facebook is not the first to come up with built-in camera sunglasses; Google and Snapchat have already done that. The Facebook Ray-Ban sunglasses aren’t equipped with AR features, but it comes with many other day-to-day features like taking phone calls and listening to podcasts or music. The company uses beamforming technology for calls, which ensures an “enhanced calling experience” like headphones.

On the other hand, Apple is working on AR and VR based headsets, which may even come in the form of smart glasses, but that’s not on a card right now. The smart sunglasses made by Facebook will appear in classic Ray-Ban styles like Wayfarer, Meteor and Round. The Ray-Ban Stories smart glasses are priced at $299 (roughly ₹22,000) and are available for sale in limited countries.