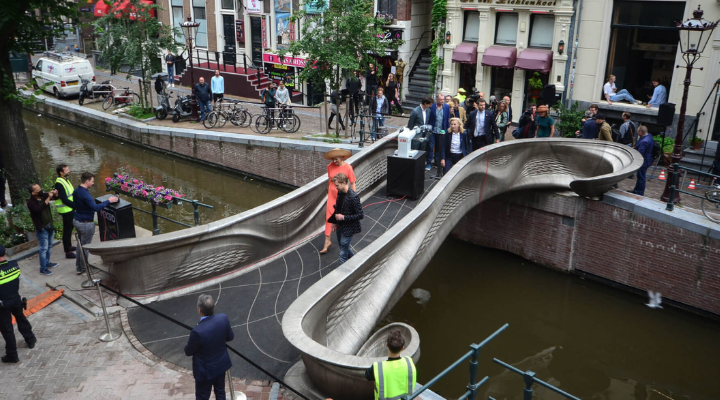 Nowadays, technology is at its best and plays a crucial role in our day-to-day lives. When we first experienced 3D movies in the cinema, it was another world experience, and now with the installation of the world’s first 3D-printed pedestrian bridge in Amsterdam, we’ve gone beyond the imagination.

The concept of a 3D printed steel bridge was first announced in 2015, and recently, it was revealed to the public by Queen Máxima of the Netherlands. The Imperial College London and the Alan Turing Institute developed the 3D printed bridge which was designed by Joris Laarma.

The development took more than four years of research and about 4.9 tons of stainless steel to build the 12-metre long steel structure. The 3D printed bridge is installed over the Oudezijds Achterburgwal canal in Amsterdam’s city centre and is now permitted to pedestrians and cyclists.

The 3D printed pedestrian bridge will be a living laboratory that will monitor and analyse the performance and changes of the structure over its lifespan. A smart sensor network backs the bridge, which will collect the data on air quality, temperature, strain, displacement and vibration. 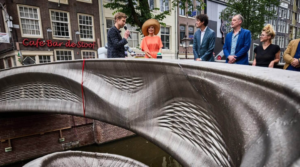 The design of the long-awaited 3D bridge, which is dubbed the MX3D Smart Bridge, was first revealed in October 2018 during Dutch Design Week. A 3D-printed metal structure was built using four industrial robots and it is strong enough to handle pedestrian traffic and its components. The data collected from the physical bridge will be imposed on a digital version of the bridge to help understand how a full-scale 3D-printed steel structure works in reality.

Earlier, the first 3D-printed concrete blocks footbridge was inaugurated in Venice city, which also gathered a lot of media attention. 3D printing has become a significant technology in engineering, reaching a new peak with every other experiment, and we can experience a lot of 3D based structures in the coming future.

Everything new in iPadOS 16