Love and Lust For Sneakers 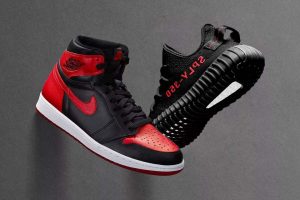 As we move into 2022, we often reflect upon our habits in the form of new year resolutions. And when it comes to sneakers, ‘hype beasts’ and ‘sneakerheads’ have their priorities set. I have always wondered why I am naturally driven to buy new sneakers, but I wonder how some people do not care much about their shoes.

I fall in love with sneakers anywhere and everywhere – in elevators, where my introverted eyes shyly glance downwards, in subways where I rethink the entire purpose of my existence and dimly lit bars. I have always had this fetish of being the best dressed in the room, and some readers move with the same mindset. It’s a sort of dopamine for our kind of people.

I have always believed there are two kinds of sneakerheads: one that lives for the hype, i.e. they buy and collect only those sneakers that are hyped in the market either for their history or for their hot collaborations. Another group doesn’t submit to the hype and buy whatever they think would fit their style.

The people who collect sneakers for the hype and history appreciate the culture as much or maybe even more than those who buy it just for the sake of wearing it. I remember visiting a friend’s place, and the first thing he showed me was his wardrobe filled with Jordans and Dunks. Upon asking why most of the sneakers were left unworn, he said something that stayed with me, “few things are not to be touched but observed.” The subtle thread connecting each exhibit element is a scattering of disparate experiences of self-professed “sneakerheads” and the artistic ways their stories are told.

Sneakers have always been an essential part of the black culture, and many of these observations come from the African-American community. The Rise of Sneaker Culture is educational – acknowledging how the black community interacts with the modern world. The culture has now spread across every corner of the world, and you can now find at least one of your friends who claim to be a ‘sneakerhead’.

Every sneaker is unique, and maintaining a pair of kicks is seen as more of an investment as the value of specific models such as signature Jordans and rare Air Max models continue to climb up even after we wear them a few times.

Is it just an impulsive decision?

Sneakerheads were thought to be a fad group that embraced compulsive and impulsive buying behaviour upon their first introduction. However, the community has had a positive economic impact within the marketplace with their resell activity over the years. Sneakerheads seek out rare sneaker collections and exclusive celebrity collaborations and create a sense of scarcity to sell them at a relatively higher price.

Where did it all start?

Most sneakerheads credit the origin of street style and sneaker subculture to the late 1970s/early 1980s with the introduction of the hip-hop era. During this time, sneakers became synonymous with street culture, and some of the most iconic sneakers like Puma Clydes, Adidas Shell Toes, Converse Chuck Taylors were introduced to the streets.

But this wasn’t it. The real boost to the sneaker industry came with the introduction of Nike Air Jordan 1s in 1985, arguably one of the most significant introductions ever, which changed the sneaker game completely. The shoe gained its notoriety because it collaborated with one of the biggest athletes of the generation Michael Jordan. The shoe has a great history since the NBA initially banned it after Jordan wore it to the court.

The Air Jordans have continued to gain popularity since its introduction and now accounts for half of the basketball shoe market. The series currently has several shoe drops and has sold over 100 million pairs. Brands like Adidas and Reebok tried to strike the lightning twice. They tried to recreate the aesthetic of Air Jordan, even mixing in exotic colors developing new comfort technologies like ‘the pump’ that would fill your shoe with air for a better fit. In the mid-80s and 90s, the footwear seen across schoolyards and city streets could say a lot about your social status.

It’s not that Nike days are over, but Kanye West created a new wave of fashion that has somewhat a cult following. The sneaker world goes into a frenzy whenever a new Adidas Yeezy is released. I don’t think that anybody besides Virgil Abloh had that sort of effect. Whether you miss the old Kanye and love the new Kanye, who is more bold and outspoken, there’s no denying the impact he had on every corner of fashion and pop culture.

In my opinion, Kanye’s genius shaped the state of the sneaker world we live in today. In 2015 when the Adidas Yeezy Boost 350 was released, people could wear it every day. It opened up a world of possibilities and opted for a much sleeker silhouette overall. It became a massive success right from the start, and Since then, it has only ever released Yeezy shoes in minimal supply.

Something that began as a humble rubber company invention is now a juggernaut of the apparel industry. The sneaker industry today brings nearly $60 billion annually and hundreds of millions of dollars are spent in its research, development, and branding. The iconic fashion presence of sneakers shows no sign of slowing down in the future as well.

Nothing officially confirms its first-ever smartphone will be manufactured in India - Expected design, specifications, and a deeper dive