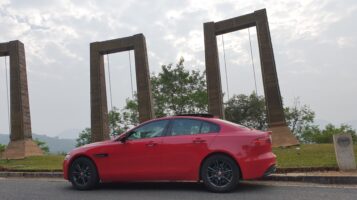 It was the 24th December and I had already planned to go to Aamby Valley for an overnight stay when my team informed me that the all-new Jaguar XE in red colour had just made its way to our Garage. And that it was red in colour on Xmas eve, that was the closest I could have brushed with Santa. The first look of it was fresh, the slimmer LED headlights and taillights fitted very well with the larger front grille and the sculpted bonnet. Ok, it’s a facelift, and we won’t use the word again and neither compares the new XE with its previous generation. For me, it is a complete new XE which has parked itself right in between the A4, the 3 Series and maybe the A6. t’s become a habit now to slide your phone to the wireless tray and the XE has it, although it charges slowly, it may be because of the low Amp, wish they could have been higher, but does the job. Also, the rotary knob gear selector has been replaced with the gear shifter as seen in the F-Type. I was driving it on the Pune expressway, and let me admit I had touched 180 km/h and mostly was cruising at 140. Sssh! Please don’t tell this to anyone as I don’t want this to reach the Mumbai traffic cops. At speeds like this when you are on the dynamic mode the sound of the engine seeps in easily through the windowpane, maybe the insulation is not that great, it’s a confusing engine sound which you will expect from a sportscar like the F-Type but not exactly the same engine sound, which is the disappointing part.

The pick up had a quick rush of gasoline hitting the chambers at times giving you jerks, and you could feel the charge. It was the 2.0-litre turbo petrol engine that I was driving with the Santa. The Touchscreen was smooth and the connected navigation with Interactive Driver Display using high-definition, graphics showing 3D maps were spot on and I particularly loved the Red graphics on the Dynamic mode. Another unimportant thing to note is that it lets you connect with your Bluetooth while on the move, and we had two connected while the other one being the Santa. It has an Ice mode, still wondering where can we drive this in India, but with rising global warming just in case, it’s future-proof. The speakers and the sound quality is not something which will appeal to the audiophile and you will always be reminded of the engine noise even when the volume is above conversation levels. What I loved was the almost bucket seats which are rather comfortable and holds your back and the firm steering wheel and premium interiors, it also has Torque Vectoring by Braking technology which means on tight turns, it applies the brake to the inside wheel and directs more rotating force from the engine to the wheel with the most grip.

We had arrived and Santa had a smile, and jaguar has got something which will take away buyers from the 3 Series and the A4, but would you buy one? It’s a Jag!

What’s not that great –