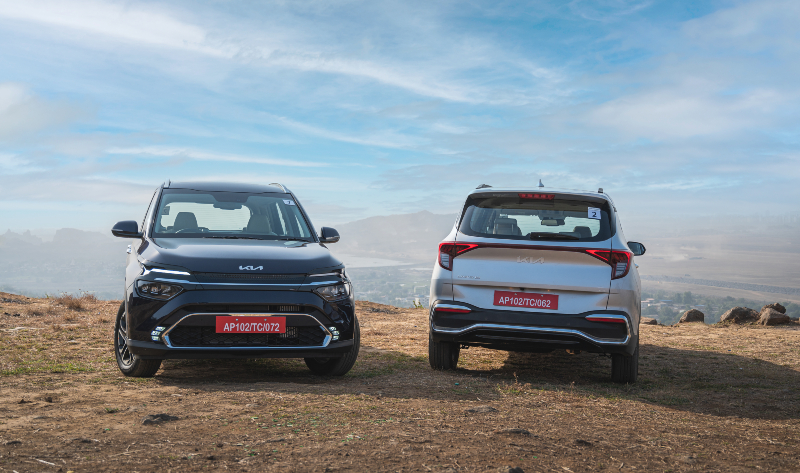 Is it from a different world? 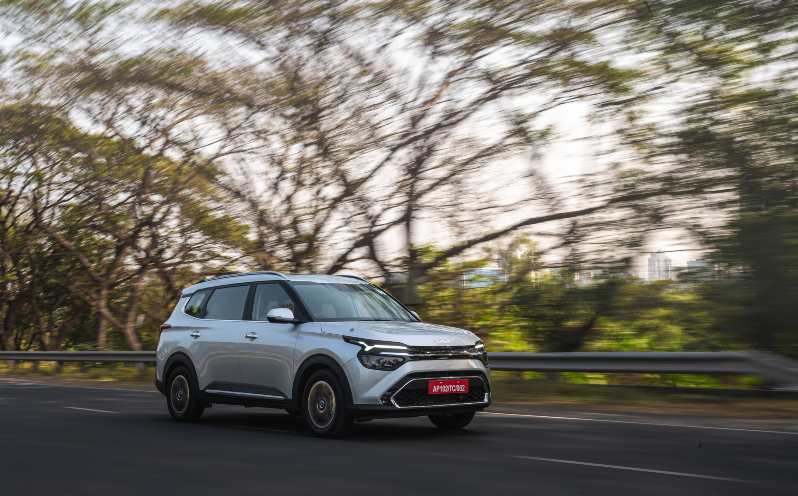 All new design ideology can be seen on the Kia Carens

The Indian buyer’s growing obsession for SUV’s has flooded the market with 6 and 7 seater family haulers. With almost every automaker in the country trying to cater and please the big fat Indian families with their offerings, Kia isn’t falling back.

To bridge this segment’s gap, Kia unveiled its new three-row offering for the Indian market, the Carens, in December last year. The Carens made its global debut in India, and incidentally, the country will also be its sole manufacturing hub for both domestic and export purposes. 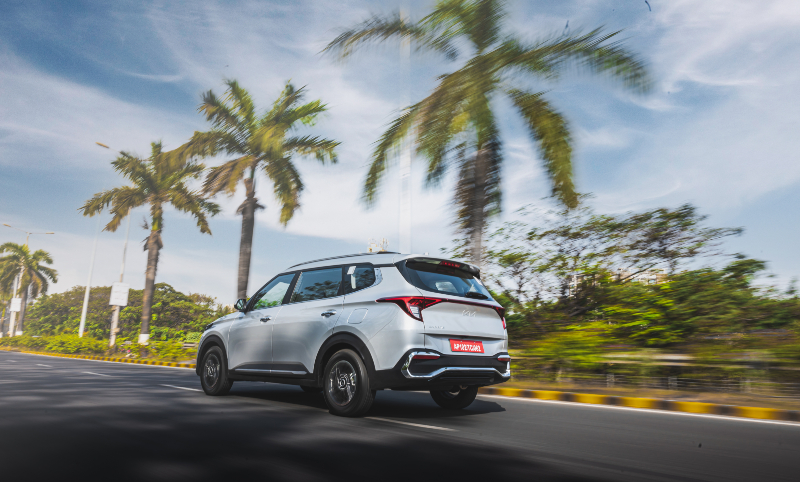 The Kia Carens is based on a stretched platform of the Creta/Seltos, similar to the Hyundai Alcazar. Dimensionally, the Carens measures 4,540mm in length, 1,800mm in width, 1,700mm in height and has a wheelbase of 2,780mm.

Now if you compare it to the Seltos, the Carens is 225mm longer and 80mm taller, while the wheelbase is 160mm longer. The Carens also fares brownie points as it is longer, wider and taller than even the Alcazar, that measures 4,500mm in length, 1,790mm in width, 1,675mm in height. Even the wheelbase is greater than the Alcazar’s 2,760mm. In fact, the Carens has the longest wheelbase in this segment, which is 30mm longer than the Toyota Innova Crsyta too, although the Toyota is longer when it comes to overall length. The dimensions certainly point to a spacious interior.

Kia is calling the design ideology as coming together of 2 different worlds apart. And it actually makes sense as Kia is neither placing it as an MPV, nor as an SUV, but what exactly are they categorizing it? A recreational vehicle.

The new Kia Carens in all its glory

The Kia Carens has a very distinctively striking presence to say the least. It has the proportions of an MPV, but also gets several styling elements to make it look like an SUV. Starting up front, the front facia is characterized by a striking split-LED headlamp assembly and a sealed off grille that is housed within a contrasting gloss piano back trim. The signature Kia tiger nose grille has moved down to the lower lip of the bumper giving space for a new chrome garnish.  The grille even features some gnarled effects and 3D patterns on the brushed silver insert for some added bling. Down below, the front bumper is more sedately styled, although the gaping central air intake does add some character. In fact, Kia’s signature ‘Tiger Nose’ motif is now featured on the bumper and not on the grille, although very subtly. 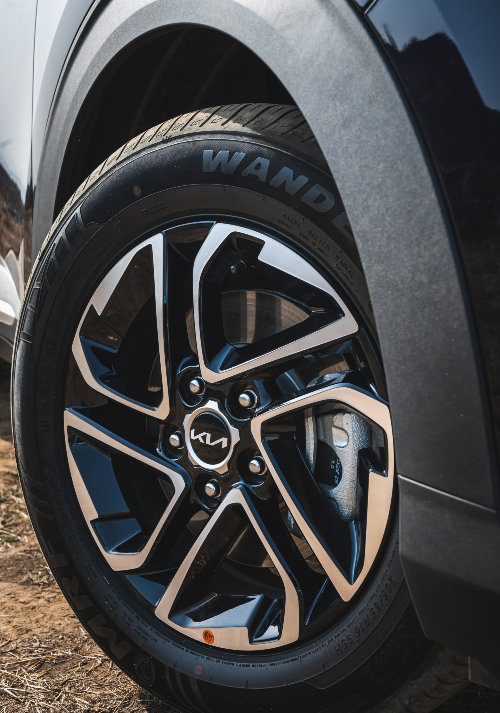 The LED DRLS are said to be inspired by constellations and hence a unique futuristic design adorns the front. I wonder how many stars it would pack inside. The crown jeweled LED headlamps are sleek and futuristic with the three slot design even carried in the LED fog-lamps which lend a distinctive visual edge through sleek and avant-garde design.

Move to the side and it has a very MPV’ish silhouette. Generous amount of chrome has been used to fancy the Indian buyers. A chrome strip running all the way from the front window sill and wrapping around at the third quarter glass sections lends it an upmarket appearance. Though the R16 crystal cut alloy wheels have a nice design, they look a tad bit small considering the proportions of this car. In my opinion, a size up would definitely make a huge difference. 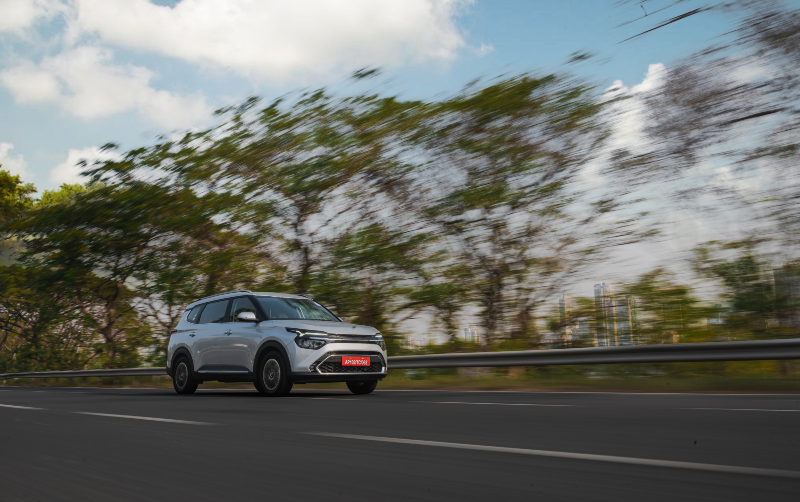 From the side profile, the Carens shows resemblance to the Seltos until the front doors, though the rear doors are much longer and it also gets a larger rear quarter window area. Strong character lines that start from the headlamps, blend into the doors and then emerge at the rear to meet the tail-lamps. At the rear, the Carens gets a pair of wrap-around LED tail-lamps which look like they have been borrowed from the Sonet. The rear windshield can be seen slightly raked and also houses an integrated spoiler. Akin to the front, the rear bumper is also aggressively styled with chrome garnish inserts. The raised ground clearance and the upright stance due body cladding all around lends it a pretty masculine look. 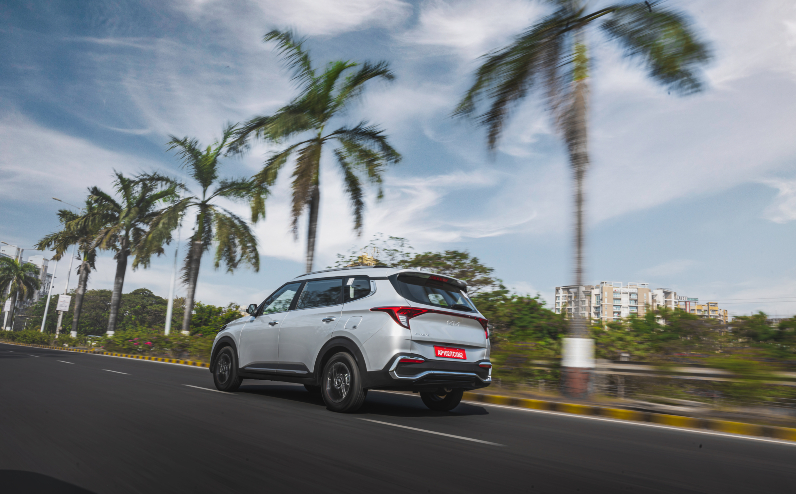 How does it feel from the inside?

In its typical fashion, the interior of the Kia Carens is very well laid with premium-looking materials and a well appointed dashboard. Use of multiple colors for the interior trim like Triton navy and Sahel beige, makes the cabin feel dramatic and lively to sit inside. A big slab of piano black is thrown onto the dash with gnarled effects and a brushed metal strip flows down below.  Something  which might bother the consumers is that the dash might pick up dust and fingerprints pretty easily and it would be a hassle to maintain it clean and shining bright. 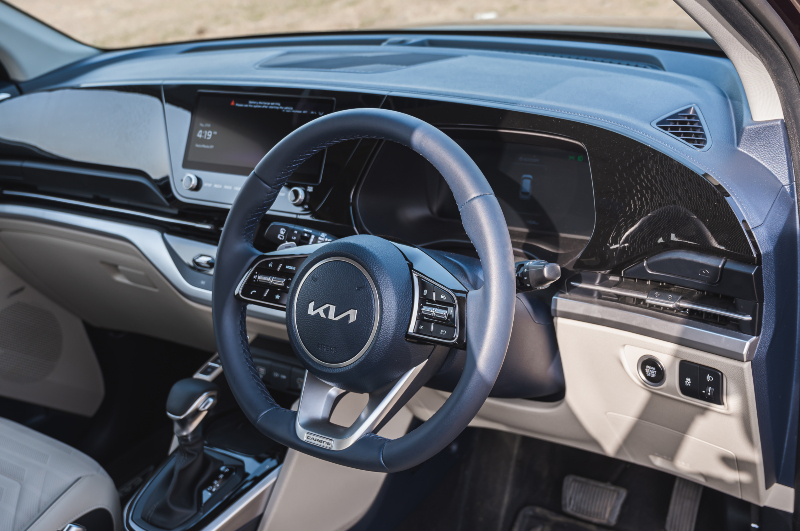 Notice the different color interior trims which jazz up the cabin

The interior also has a clean, layered effect with everything positioned for better reach. The infotainment system is neatly integrated in the dash. Giving it a premium touch. There’s even some fine detailing on the dashboard trim and on the door panels, adding some jazz to the interior.

Below the top-half, the AC vents have been integrated seamlessly along the width of the interior. The AC control unit gets a feather-touch panel with toggle switches for operating the climate controls, with the ambient lighting panel underlining all of this. 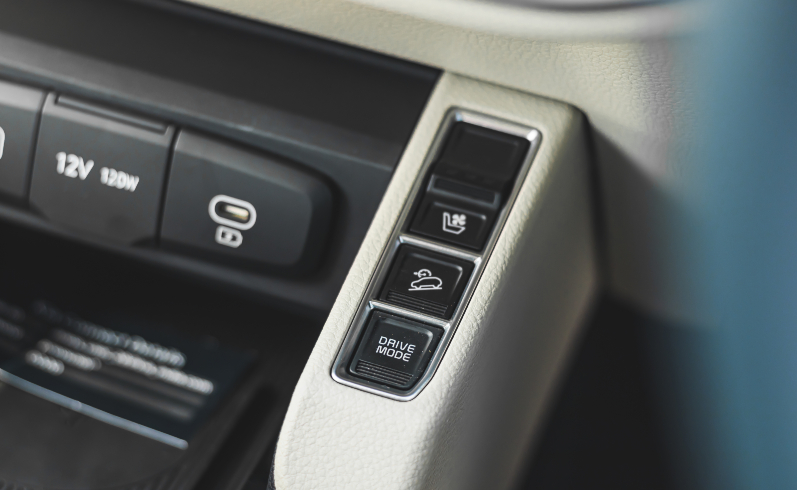 Ventilated seats and different driving modes for the AT variant.

The 64 color options for the ambient light makes the cabin feel more upmarket and lends the Carens a premium feel inside. The center console is short and stubby and features additional controls for seat ventilation, drive modes, etc. The Carens will be available in both 6- and 7-seat configurations, with the former getting captain seats for the second row. 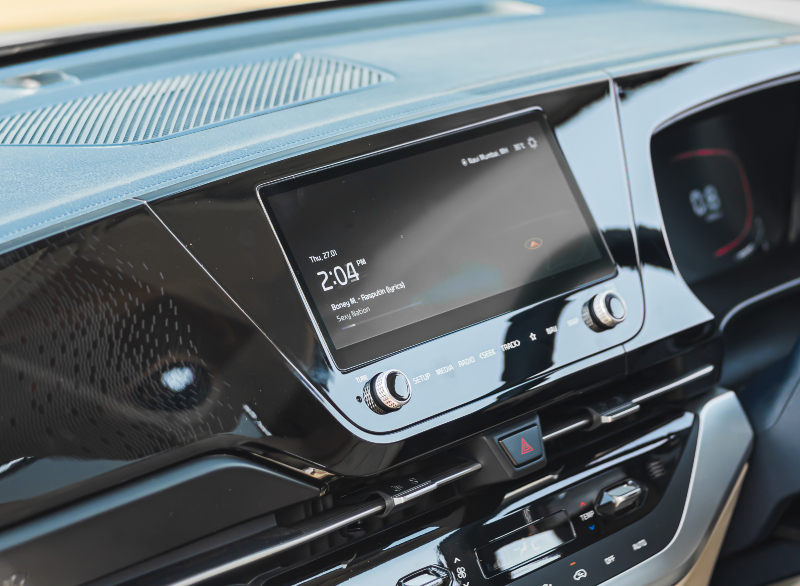 The touchscreen in fluid and well responsive to use

Generous amount of cubby spaces in all the nooks and corners allows for ample storage of nick-nacks. Infact, all the doors get 3 bottle holders and small pockets to keep phones or other stuff. The front doors even have dedicated slots for keeping umbrellas during the rainy season.

Now you don’t have a panoramic sunroof because of the roof mounted AC vents for the 2nd and 3rd row, but you do get a single unit sunroof , just in case! 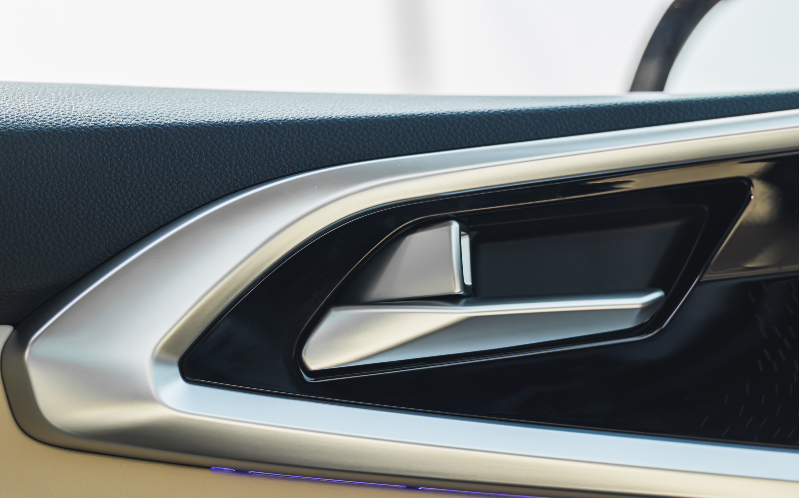 The second row boss seat features a one-touch tumble down function for easy ingress and egress to the third row. A fold up table and an air purifying module are housed behind the front seats. All in all you get 6 USB (5 C-type) ports to charge your devices. 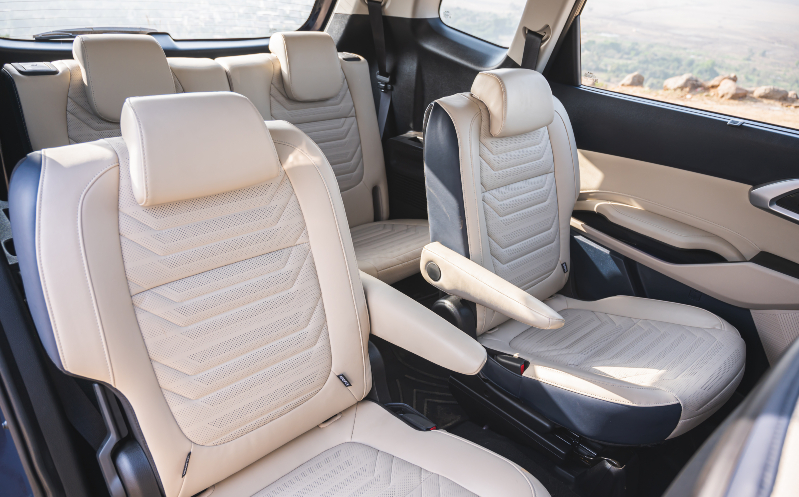 Considering the sheer size of the Kia Carens, stepping in and out is not much of a hassle and hence, it will be comfortable even for senior citizens in your family. The seats though are a bit on the narrower side, but provide good under thigh support for easing the longer journeys. 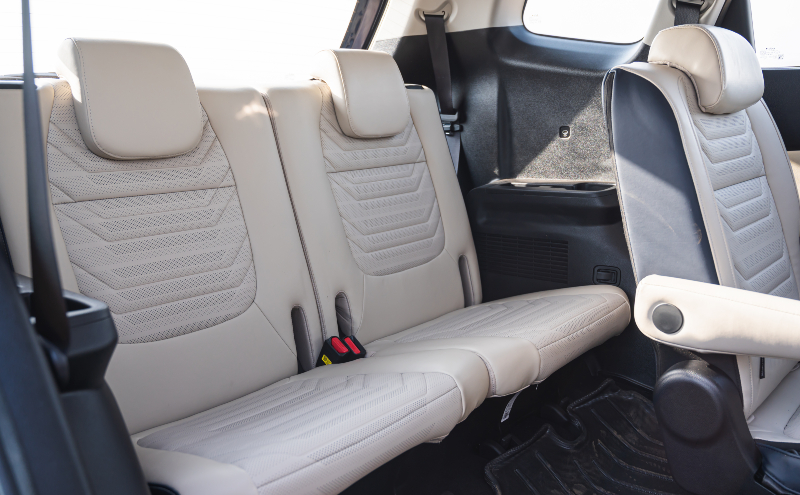 Now the extended wheelbase makes enough room even for the third row and for sure it is one of the best in its segment. Not just kids, but even average sized adults won’t be complaining much about the space at the back. 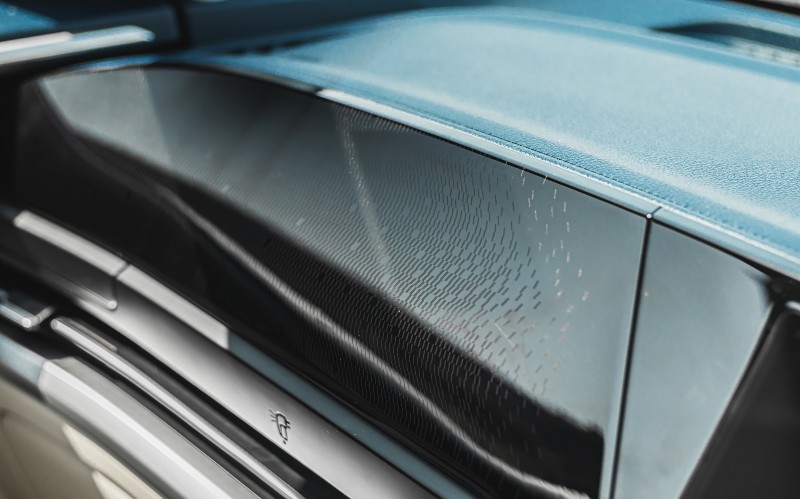 Notice the gnarled effects on the piano black trim

What all tech does it pack?

This being a Kia, the equipment list is long and is a big highlight of the Carens. Top-spec variants of the Carens are equipped with a 10.25-inch touchscreen infotainment system with Apple CarPlay, Android Auto and Kia’s UVO connect. The touch is fluid and well responsive. It also gets a fully digital instrument cluster, an eight-speaker Bose sound system and a multi-function steering wheel with buttons for audio controls, voice commands and calling, similar to the one seen on the Sonet and Seltos. 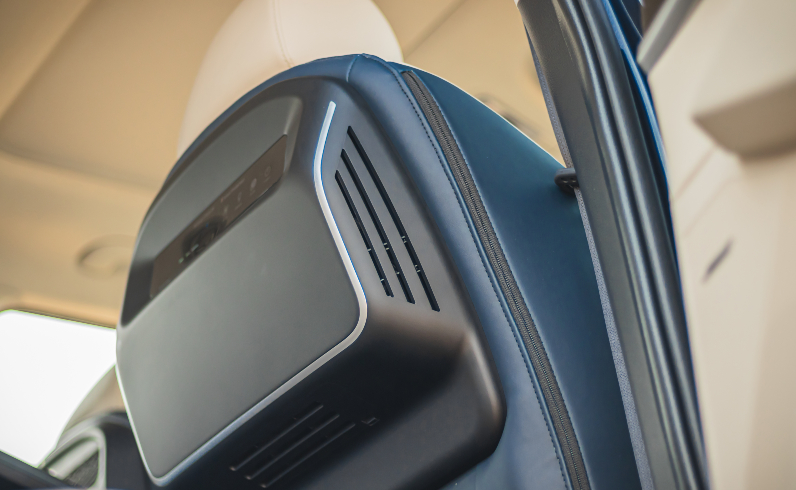 The air purifying module behind the driver seat

Notably, the Carens also gets roof-mounted AC vents to aid cooling at the rear, which rules out the possibility of a panoramic sunroof. There is a single unit sunroof for the fancy purpose though. Other highlights on the Carens include a 64-color ambient lighting, ventilated front seats, seat-back table with cup holder, electrically powered, one-touch tumble down feature for the second row (first in segment feature) and an air purifier. Kia has particularly stressed on safety features with the Carens as all models get six airbags, ABS, ESC, hill-start assist, disc brakes at all four ends, TPMS and rear parking sensors as standard across all variants.

How well does it drive?

Lastly, the diesel engine is a 1.5-litre unit which produces 115 hp and 250 Nm of peak torque. It can be opted in either a 6-speed manual or 6-speed torque converter automatic gearbox. These engine-gearbox combinations are the same as the ones that are offered in the Kia Seltos. 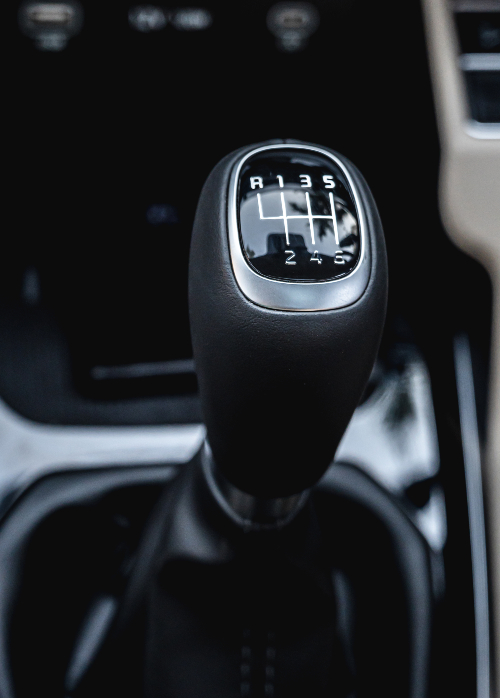 The overall drive is pliant and poised. The engine is never in a hurry and delivers a linear performance across the gear ratio range. It feels plush and sturdy at high speeds. Something worth pointing out are the well damped suspensions which can gulp in all the major potholes of city driving and the raised ground clearance allows the vehicle to glide over rough terrain patches. 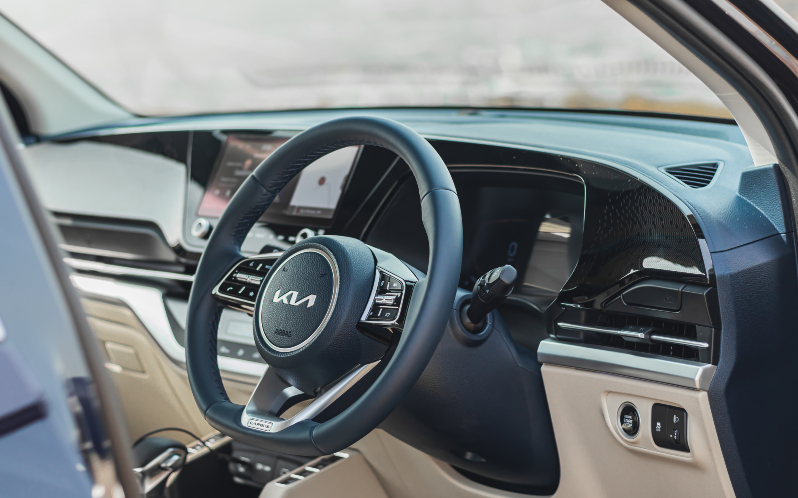