Story of India’s Most Popular Audi 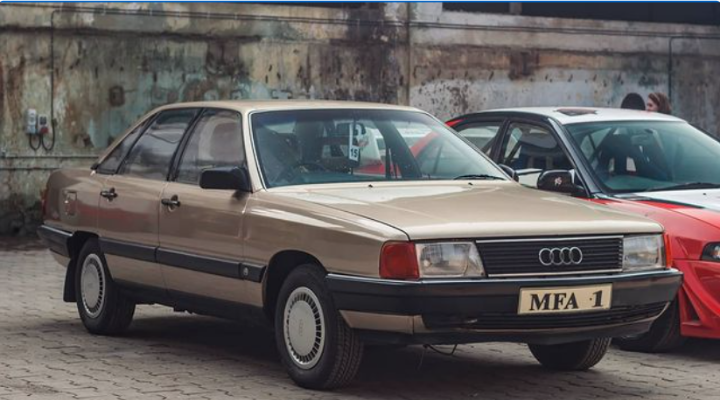 Vintage cars and classic India vs Pakistan cricket matches have a few common factors, they hit differently, straight in the heart, and take you back to the times when people used to adore cars like their children and celebrate India’s victory against Pakistan like a birthday party. We don’t see vintage cars often, especially Audi, frequently moving around Indian streets, as a number of them are lying disgracefully in the city junkyard. However, one Audi car is still in good condition and has an exciting story to narrate, and this Audi belongs to one of the best commentators from the Indian contingent, India’s former all-rounder and current Head-coach of the Indian cricket team, Ravi Shastri.

The world knows Ravi Shastri for his commentary, particularly for his iconic words, “Dhoni finishes off in style. A magnificent strike into the crowd! India lift the World Cup after 28 years!” when MS Dhoni, former Indian skipper, hit a humongous six against Sri Lanka pacer Nuwan Kulasekara in the 2011 ICC World Cup final. Besides this, Ravi Shastri is also known for being a part of the World Cup-winning squad of 1983 and the first Indian cricketer in domestic cricket to hammer 6 successive sixes in an over. As a cricketer and coach, Ravi Shastri has achieved a lot during his time, and one of his most outstanding achievements is winning an Audi 100 sedan during the 1985 World Championship of Cricket.

The Audi 100 was one of the most popular cars manufactured and marketed by Audi, and back in the day, it was owned by many celebrities. The company started its production in 1968, and it was available until 1994. The car Ravi Shastri won was the third-generation Audi 100, launched internationally in 1982 and during those times, there were very few luxury cars on the Indian roads owned by ordinary citizens in India. In fact, when Ravi Shastri was voted as the ‘The Champion of Champions’ and was awarded an Audi 100 sedan, India’s then Prime Minister Rajiv Gandhi had to order Indian customs officials to waive off the heavy import duty the car required to enter the Indian territory.

How did Ravi Shastri win the Audi 100? 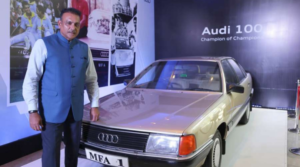 Ravi Shastri played tremendously well during the tournament and came up with an all-round performance where he scored 182 runs and took eight wickets in five matches. He got into a tiff with then Pakistan skipper Javed Miandad who also performed great during the tournament. In the final Match, Javed Miandad managed to score 48 runs while Ravi Shastri outperformed him with not out 63* runs and one wicket. Ravi Shastri was awarded as the Man of the Series for his stellar performance. Indian team conquered Pakistan by 8 wickets to win the World Championship of Cricket, which was held only for once in 1985, and Wisden adjudged the Indian team that won the cup as ‘The Indian Team of the Century’. 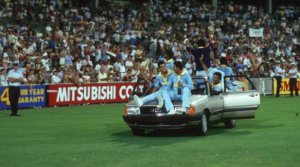 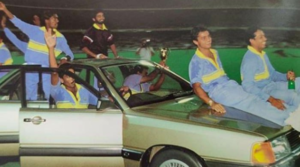 Along with the Man of the Series trophy, Ravi Shastri was awarded an Audi 100 Sedan for his performance, and soon a victorious Indian team clustered the Audi 100, occupying spots both inside and on top of the car. The allrounder drove the sedan around the Melbourne Cricket Ground (MCG) in Australia, and since then, the car has become a symbol of cricketing richness in all senses. The Audi 100 sedan, which Ravi Shastri won at the World Championship of Cricket, is close to his heart and his most prized possession. He takes the car for a drive every Sunday whenever he is in Mumbai, and surprisingly he didn’t even let his father drive the car without asking for his permission.

The fashionable vintage Audi 100 owned by Ravi Shastri is currently India’s most popular Audi car and is still in pristine condition. Till today, Ravi Shastri says, the car doesn’t belong to him, it belongs to India, to the Indian cricket team, though during one of the pre-tournament meetings, when asked about sharing the car, he wasn’t ready to share the car with anyone and was prepared to do anything to win the car which he successfully earned by playing great cricket. Since then, Audi has become a prominent part of Indian cricket and signed several Indian cricketers as their brand ambassadors. Ravi Shastri has maintained the car really well, it still looks brand new, and he often gives out the car to exhibitors to showcase, as it is considered one of the first Audi cars reported in India.