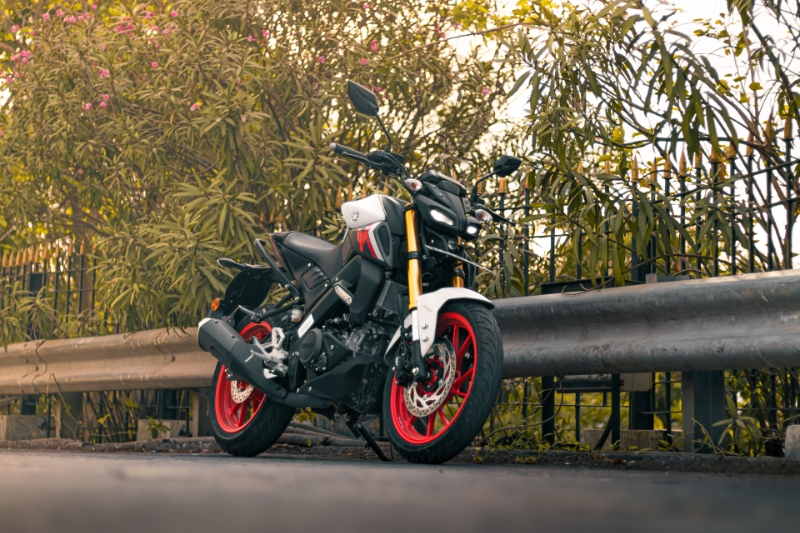 From the land of the rising sun!

Naked streetfighting machines have always adorned the Indian roads and have had a sweet spot in my heart. So when Yamaha first launched the MT-15 in India, expectations were outraged because it was almost the same motorcycle as the R15 underneath, but with less weight to carry around and an extra-terrestrial fascia that could even make an alien contemplate its existence. The Yamaha R15 might have been a raging success but the same couldn’t be said about its street counterpart.

However, Yamaha has now equipped the MT-15 with enough ammunition to go all-guns-blazing on its competition. The prime weapon of choice has to be the inclusion of golden USD forks and a few other key upgrades, but would these updates suffice in making the MT-15 2.0 better than its predecessor? 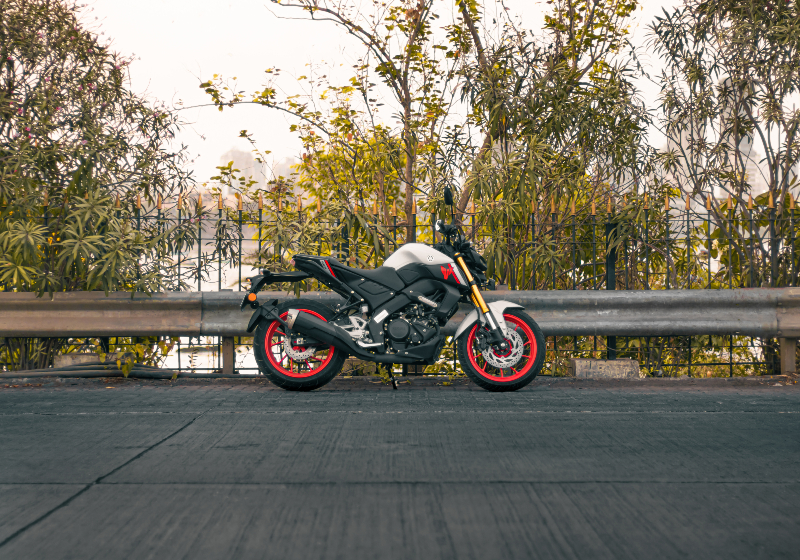 Now that the R15 V4 is finally bestowed with the addition of golden USD forks, it was child’s play to assume that the MT-15 would receive the same upgrades. And it has! The USD forks have certainly added a lot of drama in the front, apart from lending the MT-15 with sharper riding dynamics. The MT-15 has never been lethargic when it came to maneuvering it, but the second generation has kicked up the handling characteristics by several notches. The front end is now more reactive and the rider now feels a lot more connected to the tarmac than before. This particularly makes the MT-15 2.0 a perfect motorcycle for shuttling around in city traffic where you can just slice through the moving traffic like a Japanese Katana. A cast aluminum swingarm has now replaced the box-section unit of the previous motorcycle. This addition has affected its stability by a fair margin and the MT-15 2.0 now feels a lot more pliant on the road than before. Be it highway straights or leaning bends and corners, the MT-15 for sure feels like a Yamaha in all its glory. 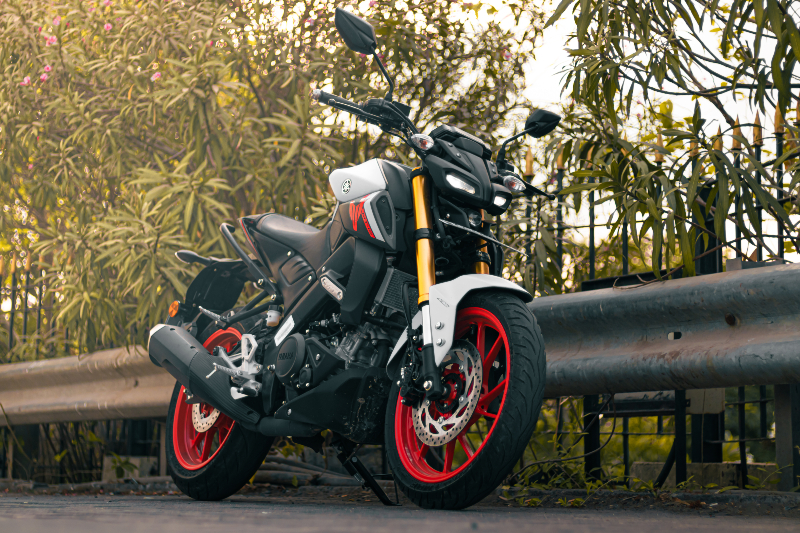 This hooliganism and reactive handling is further accentuated by its comfortable ergonomics. Its riding stance is like that of a true-blue streetfighter with a low-set flat handlebar and rear-set footpegs which provide a more comfortable posture than the R15. But the downside to the suspension front is that it feels way too stiffer on city road potholes and over the undulations of the road.

Yamaha has also slightly tweaked the engine, the official spec sheet reveals that the overall power output from this 155cc, single-cylinder, liquid-cooled engine is down by 0.1PS but the torque has gone up by 0.2NM. These mild revisions have made the MT-15 a lot more tractable than before as it can chug along as low as 25kmph in the sixth gear which is a formidable feat for an engine that is renowned for its high-revving nature. This 155cc motor is an absolute gem, no wonder Yamaha has milked the cows out of this engine by deploying it in a variety of products. All thanks to the magic woven by the VVA tech, the MT-15 2.0 is a lively machine but in particular power bands. From a standstill, it gets off nicely, taking all the assistance from the VVA but the actual feast commences when you breeze past the 6000 rpm mark on the tachometer. At around 7000 rpm, the VVA kicks in yet again, breathing a new life into this engine. After that, it keeps pulling ahead like its tail’s on fire and keeps pulling with a feisty force till it hits its redline. This is exactly what makes the MT-15 2.0 a joy to blast around. Keep the throttle pinned in every gear and it delivers in spades. The ideal cruising speed is around 100kmph with the engine humming happily at 8000 clicks. 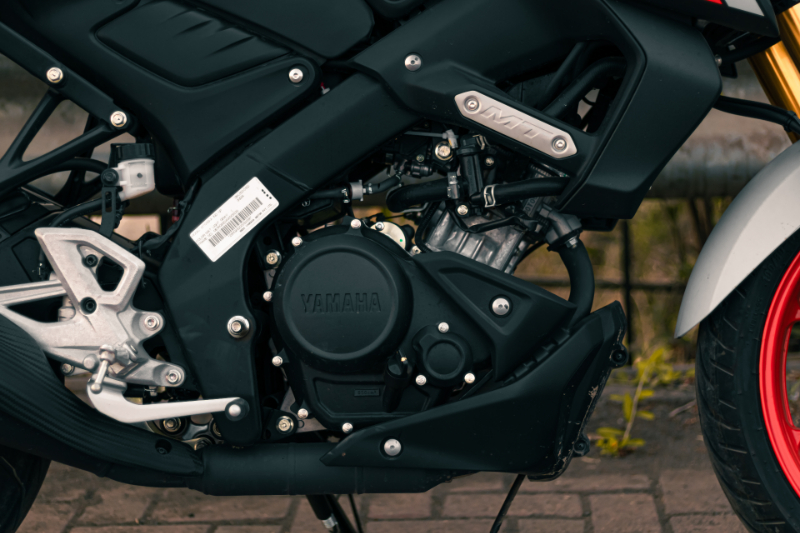 The simplistic LCD instrument cluster is now a goner and has paved way for a Bluetooth-enabled unit that displays Call, E-mail, and SMS Alerts along with Smartphone battery status available through the Bluetooth-Enabled Y-Connect App.

It is now time to shed some light on its dark side. 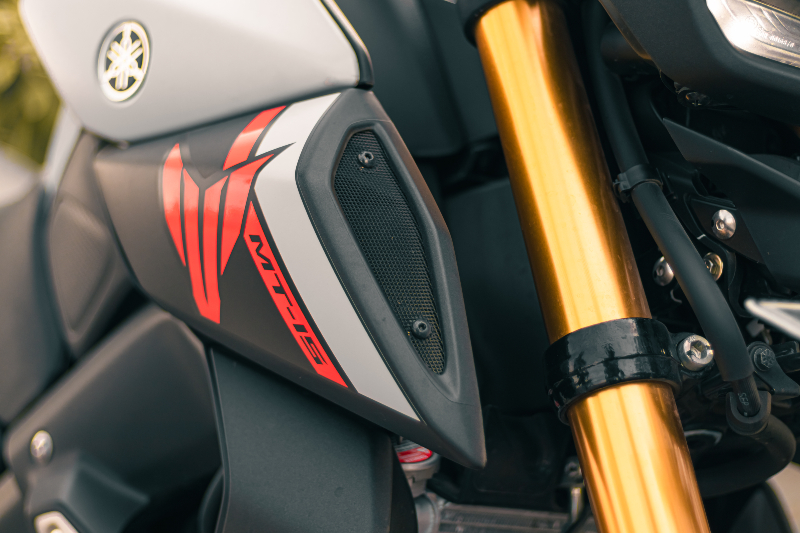 As rude as pointing a finger at a Japanese!

Life is like a perennial barter deal as you have to trade something to receive something in exchange for it. Those glitzy golden USD forks might have made the MT-15 2.0 sharper than before but the stiff ride quality comes out as major trade-off. Since the front end now chatters a lot more than before, you can feel everything that is happening on the road. The braking feels adequate at best but more feedback and bite would have rounded off the rough edges. We still cannot wrap our heads around the fact that it still misses out on dual-channel ABS. 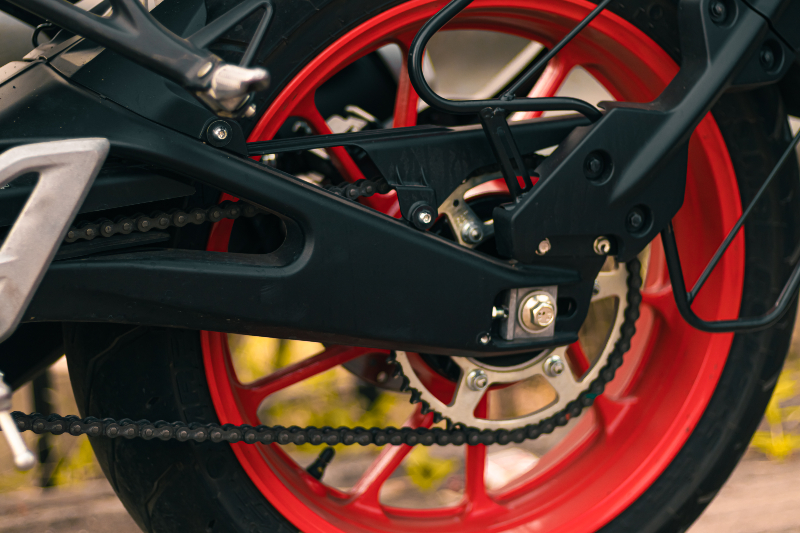 The cramped proportions of the MT-15 become even more pronounced when you invite someone to ride as a pillion. The pillion seat is borderline non-existent because even the number plate holder at the back is longer than the pillion seat. It might make the MT-15 look uber-cool but be prepared to get hurled with curses if you take someone along with you on a long ride. 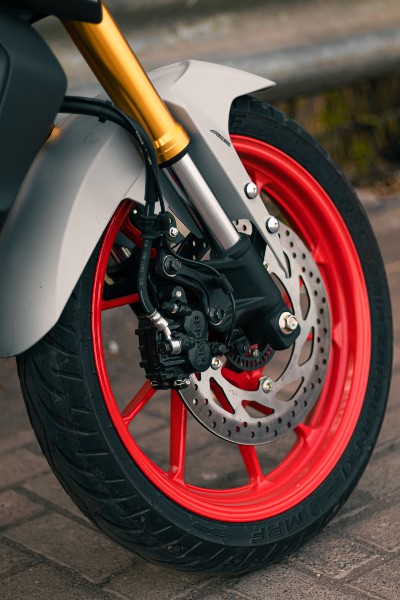 We might adore the 155cc mill to death but it has its own set of shortcomings. Although the top-end performance of the MT-15 is to die for, the mid-range is rather bleak. There’s absolutely no juice in the mid-range so you are left with no other option than to wring it through all the gear ratios. Moreover, mild vibrations start spoiling the fun at around 7000 rpm and they keep get surfacing higher up in the rev range. 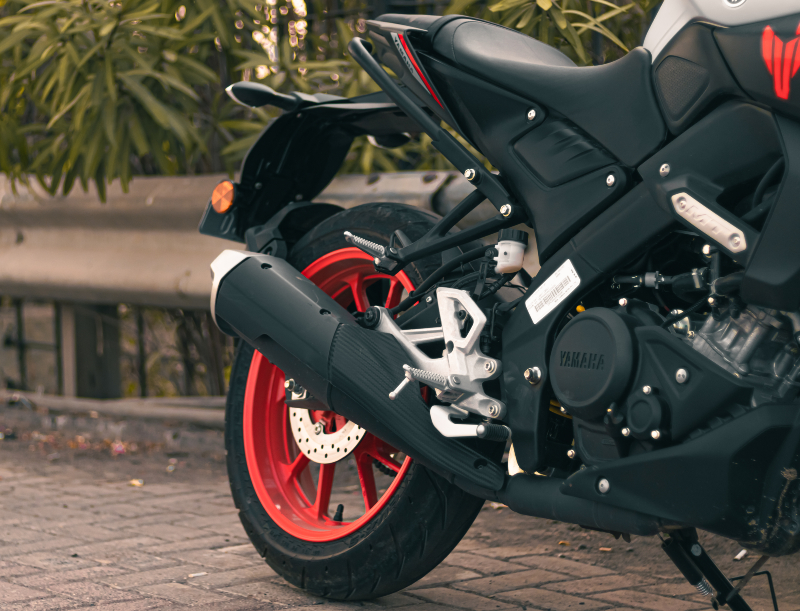 The MT-15 2.0 definitely looks more radical than its competition, thanks to that unique fascia. But it sort of comes out as a missed opportunity that Yamaha didn’t play around with the aesthetics of the MT-15. A revamped overall design inspired by the bigger MTs would have justified this generational upgrade even more. 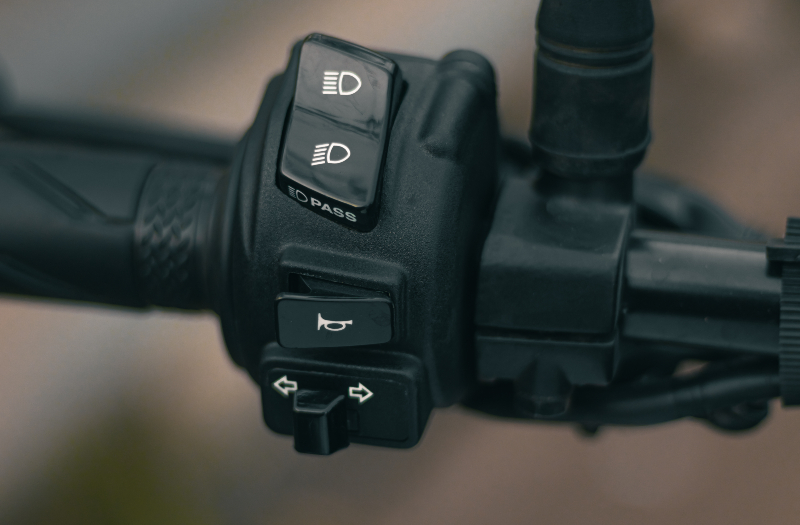 Usually, we save the best bits for the last but this time around, we are sliding away from the regime to pinpoint the most irritating ergonomic feedback of the MT-15 2.0. The horn is placed usually where we find the indicator toggle and vice versa. Its more of an intuitional defect than an ergonomic one. I mean,  why Yamaha? I had the MT-15 with me for a week and even after riding it for a considerable amount of time, I found myself cursing at this placement every single time I reached out to operate either the horn or the indicator. I could have dug deep in the thesaurus to find a better word than ‘irritating’ but it fits the bill perfectly. It actually is irritating. It also loses out on turn-by-turn navigation which could have proved to be a lot more useful than SMS and call alerts. 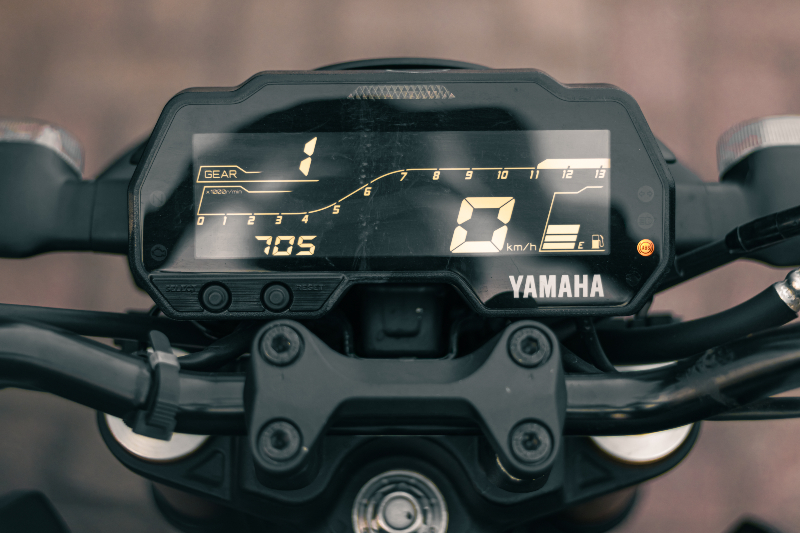 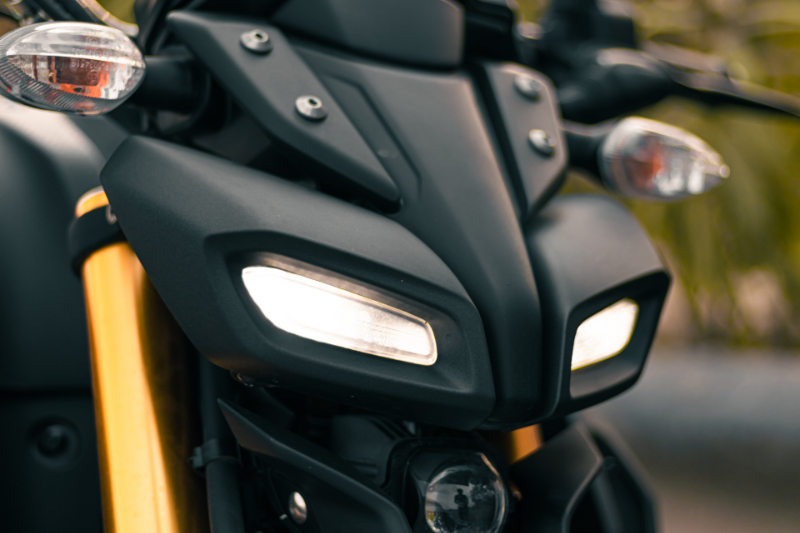 The new MT-15 2.0 has seen a price bump of INR 12,000-13,000 as it now retails at INR 1.60 Lakh. The pricing might sound a little steep but when you factor in the R15 V4 and KTM 125 Duke into the equation, it starts making sense. It looks dope! Even criminal in some sense! Handles like it is supposed to and being an urban commuter, its top-end performance will make your urban ex-girlfriend curse you more. But the MT-15 2.0 could have been so much more! It lacks the mid-range grunt we usually associate with streetfighters and the lack of dual-channel ABS is still not quite understandable. Overall, the Yamaha MT-15 2.0 might be a better bike than before but it still needs another generational upgrade to evolve to be the best version of it.