Who would have thought that former president Donald Trump will come up with his very own NFTs and also sell them out in under 24 hours? Not me certainly. However, truth is stranger than fiction and it looks like Trump has made a splash in the NFT market when nobody was seemingly interested in acquiring digital images. So is Donald Trump making NFTs great again? let’s find out

Trump’s NFT collection dropped at a time when the market volume of the tokens is down by 89% from its peak in January. Dune Analytics reports that the trading volume of NFTs on OpeanSea Marketplace is the lowest since June 2021. One of the most famous NFT projects, Bored Ape Yacht Club NFT can be acquired now just for $80,466 which is an 81% drop from its peak value. Thus, Donald Trump’s NFTs selling out in under 24 hours is a testament to his popularity among the red-hatters. 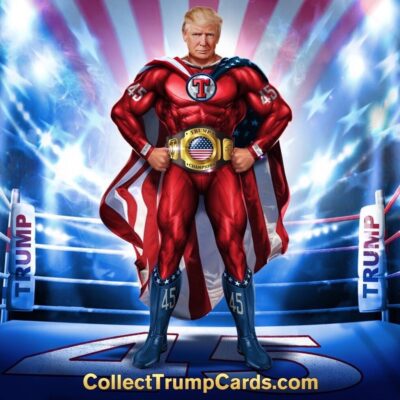 Despite the bad timing, Trump’s NFT collection easily shot up to the top of OpenSea’s marketplace ranking, raking over $1.4 million since its launch. The collection’s trading volume is 900 ETH whereas its floor price is about 0.19 ETH which is about $230. The price has currently surpassed the original ask of $99 which is rare in the current NFT market.

Trump digital trading cards are fantasy NFT cards based on the polygon blockchain. The trading cards portray an exaggerated version of Trump showing him as a super-human, an astronaut, and a boxer, among others. There is also a certain reward program attached to the trading cards as buying 45 Trump trading cards at one go gives users a ticket to a gala dinner with Trump himself. Many are suspecting that this proposition has led to Trump Trading Cards becoming a massive hit among his fanbase and crypto bros.