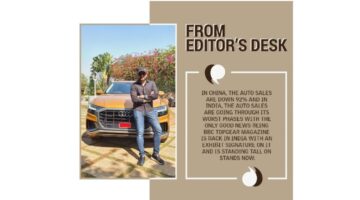 Did you know, Creeper was most likely the first computer virus developed in 1971, of course since then there have been many malware including Melissa, Blaster, Slammer, Nimda, Code Red, The Morris Worm, Elk Cloner and even ILOVEYOU which did not spread any love but screwed up your computers. More than 10 million computers were in ‘love’. So, as techies, we seriously thought that viruses were something which happened to computers and smartphones until the deadly coronavirus entered the scene, which has shaken the world. It has pulled the carpet in one sweep from the feet of travel, business, economy, stock market and everything with thousands suffering and many dead. We stand with China as it fights the worst of epidemics and still gripping and because we live as global citizens its cases are reported everywhere now. Also, it shows in our integrated global economy where China is the manufacturing hub, supplying components or finished goods in almost every sector is now crippling.
The rumour mills are doing its rounds with some saying it’s a bio war, its an experiment gone wrong, and the Yuhang province known to be eating all kinds
of things including bats. Yes, the flying bats. The Tech industry is going to be affected the most, with everything being manufactured there. We already saw Mobile world congress being called off, Geneva Motor Show and many such events shaking up the ribs of commerce. In India, lots of big launches had been delayed including Note 9 from Xiaomi. Things are not looking good, and no one has an answer with the global sentiments down. But nothing lasts forever and just like we have hot water springs in Iceland, water wells in scorching deserts and morning sunlight tearing apart the darkness and the COVID-19.
In China, the auto sales are down 92% and in India, the auto sales are going through its worst phases with the only good news being BBC Topgear Magazine is back in India with an Exhibit Signature on it and is standing tall on stands now.
The optimists might say, the show must go on, maybe with masks on and hands constantly dipped in sanitizers. Travel if it is necessary, and let’s make use of all the technology for communication VoIP, chat meetings and stay alert till the Corona rests in peace. Forever that is!