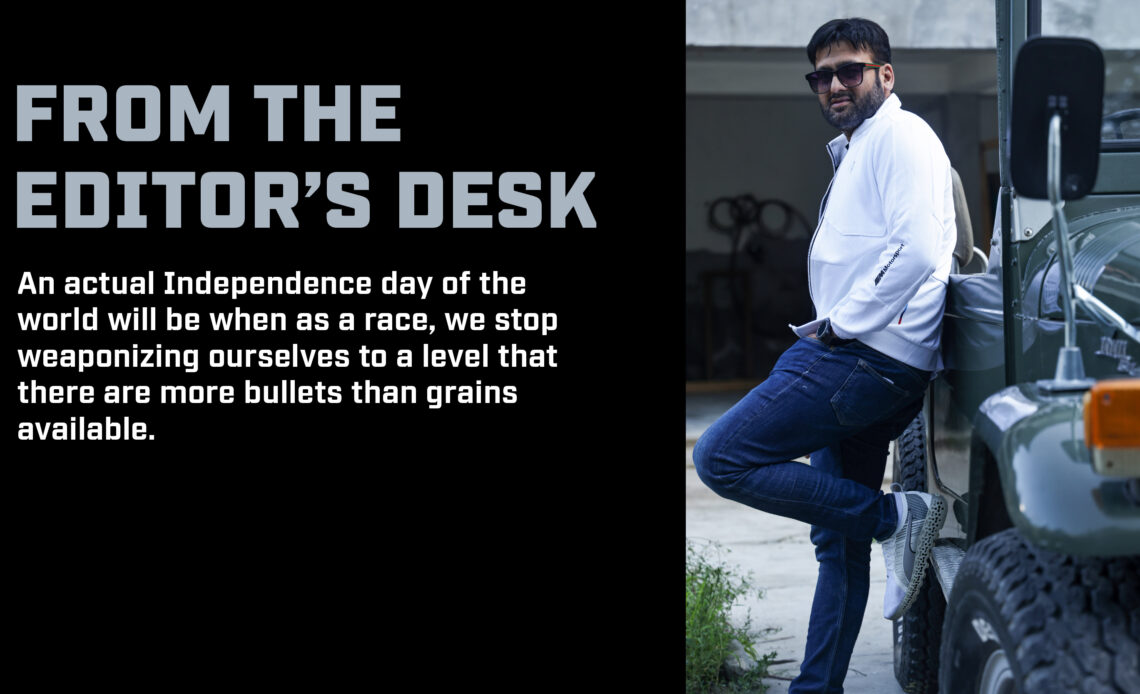 We have completed 75 years of independence from the British,
and as History repeats itself, some countries are again out to
make colonies and extend their land territory. Look around
Russia, which has been fighting a war with Ukraine for the last
several months and has disrupted the global economy. China
is making unpleasant moves over Taiwan; Israel and Palestine
can never stop bombing each other. The geopolitical and arms
race is again beginning, and humans will never change. For
centuries the folks sitting in power get restless and to massage
their false ego or leave behind a “Great Emperor” tag, or the
“most powerful president” will do stupid things in some garb or
other. Isn’t there much to already figure – Inflation, economy
Covid etc.? Can’t the world leaders have a common goal of
peaceful existence? Imagine if the world didn’t have to spend
trillions of dollars on those fighter jets, missiles and warships.
There would be so much money available for the welfare of
humankind. Maybe with that much money, we could do more
research on space tourism or find other species in the solar
system. James Webb’s Telescope is one example of what is
possible, and the first big reveal was Webb’s first deep field, an
image of thousands of galaxies 4.6 billion light years away. This
is the farthest into our universe we’ve ever seen, read the whole
story on.
Geopolitical disturbances and with so many nuclear weapons
available, we are just a trigger away from getting wiped out.
Is it all worth it? Today Pakistan is on the verge of bankruptcy
because its defense spending is way higher than economic
development projects. An actual Independence day of the world
will be when as a race, we stop weaponizing ourselves to a level
that there are more bullets than grains available. And adding to
it, there is a global food grain shortage in the world along with
semiconductors, but no dearth of bullets and missiles.
We have listed 75 gadgets that have changed how we live and
significantly impacted our daily lives. They are timeless, and just
like History repeats itself, pondering over these inventions will
give you a sense of timelessness. How simple inventions have
saved so much of our time and time, which is the only commodity
which can’t be replenished? And sticking to the time subject – did
you know all the Apple devices show the time 9:42 across various
commercials, print ads, and even on their website, as that’s the
morning when Steve Jobs announced the very first iPhone in
2007? Almost similar to this, all the Rolex watches are set to ten
past ten with the second hand at 31 seconds to get the aesthetic
look. Also, the date is always set to the 28th, and the day is
always set to Monday. We have dug deep into timepieces and
picked up Rolex in our ‘How Big Is’ section.
In other trivia, did you know It takes Earth 23 hours, 56 minutes
and 4.091 seconds to finish the one rotation so that the sun
appears in the same position in the sky? Yeah, we have been
fooled since school days. You can do a lot in those 3 minutes and
56 seconds. Just like this Editorial piece would have taken you
that much time to come here.
Until the time comes again,
Stay tuned for all that is happening on exhibit.tech and watch
our video reviews on the exhibit youtube channel, which now has