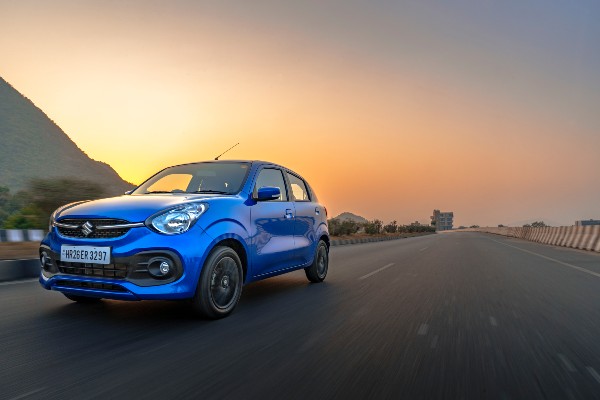 Maruti Suzuki sales are banking on products that cater to mass-market audiences, at least in India. With the sales plateau and the world slow-down (read as lockdown), it is time for something new. Maruti has been studying the demographics in India and, adhering to the mindset of young professionals, launched the all-new Maruti Suzuki Celerio.

The new Celerio is available in six different colours – Speedy Blue, Arctic White, Solid Fire Red, Glistening Grey, Silky Silver, Caffeine Brown with a young audience in mind. The design is a complete overhaul compared to the ageing Celerio launched in 2014. Noticeable changes include curves that translate all over the exterior fascia and then some. The wheel arches are neatly designed to give a sense of bulge without actually protruding. The most exciting section is how curves on the front and rear doors make the car like a concept design made real for the masses.  Curved headlights, curved front doors, a (mandatory to Indian markets) chrome strip splitting the nose grill, indicators integrated ORVMs, and a shrunk down Baleno inspired tail section make the Celerio look like a major overhaul to its earlier design.

The new Celerio is 55 mm wider than before. Also, its wheelbase is now 10 mm longer, making it 2,435 mm. The new Celerio has a 170 mm ground clearance, 5 mm more than the old model, making it easier to tackle all road undulations. Our top-of-the-line ZXi+ variant also comes equipped with keyless entry assist next to conventional upward pull door handles. Unlike its predecessor, the A-pillar is also sanely sized, which created a huge blind spot for the driver in the earlier model. What comes exclusively to the ZXi+ variant are the 15″ alloy rims with 175 section Yokohama tyres. All other variants come with standard 14″ rims and 165 section tyres.

Hop inside, and the all-new tagline feels justified cocooned in varied textures of black fibre all across the interiors. The earlier Celerio did come with part analogue and part digital console, but Maruti has overhauled the same approach on the new Celerio. The background textures are symmetrical geometric shapes with a clean and understandable round design that matches the new Celerio DNA. It looks amber clad, round, modern and youthful, with ample information for the driver. There are tonnes of textures on the dashboard, all in black fibre. Gone are the door controls from the doors, and everything now sits in the central bay. For better or for worse, the central console flaunts a 7-inch Smartplay touch infotainment system with support for wired Android Auto and Apple car play support. Do understand that only the top-end variants get this feature. The centre console extends adjacent to the front row seats ending with window controls for the rear seats.

Doors of the Celerio are barebones with no control units, but they make up for it with large door pockets, enough to place six full-size bottles across four doors. Apart from the base variant, all other variants get electronic controls for ORVM adjustment on the right side of the steering. This panel also features the switch for auto start-stop feature. Seats are cushioned well enough with integrated headrests for both front and rear seats. Thanks to the additional wheelbase, space at the rear is comfortable and ample for three teenagers. A healthy 313 litres boot space apart from a sink well for the spare wheel makes the car spacious enough for long trip luggage. Note that the boot storage lip is high and could be a hurdle when loading heavy baggage.

We drove the ZXi+ manual, and automatic variants, which come equipped with steering mounted controls, adjustable steering, height adjust for the driver seat and most bells and whistles of the lot. Such creature comforts are a welcome addition to the Celerio. That said, Maruti has also introduced the K10C 1-litre engine with this car. The engine is the same across the various variants, with AMT (AGS) offered upwards of the VXi variant. This engine is run by a 5-speed manual and automatic transmission and produces impressive 25+km/l mileage, a segment-leading number. Let’s check out how it feels to drive.

The new K10C engine is potent and carries the signature torque-oriented appeal. On paper, the engine makes 67bhp at 6000rpm and 89Nm of torque as low as 3500rpm. In the real world, the first gear seems short and to the point. Shifting up to the 2nd and 3rd gear with a bit of throttle reveals a healthy powerband that can stretch in 3 digits and way over the legal limitations on Indian roads. The engine is happiest over 1200rpm and pulls strong right up to 6000rpm. The 4th gear is excellent on highways with enough grunt to overtake, albeit in linear power delivery. 5th gear is best suited for comfort cruising which this engine does not mind doing all day long. The steering is electronically controlled, but the inputs are precise, and feedback is ample to feel the road underneath. What came as a surprise is how this car handles within city limits. At times, the steering, engine and chassis come together to make one feel like they are driving a much smaller car than the spec sheets suggest. This characteristic is excellent for novice and experienced drivers irrespective of their sex, age and other choices. The increased ground clearance and dimensions also make the car rock-solid on highway and in city speeds. There is a certain sense of body roll when carrying a few people and maneuvering the car at high speeds but never too intrusive in the overall driving experience.

One thing to be noted was the way this engine sounds when revved and performance-driven. We should make it clear that our cars were brand new off the assembly line. When stressed, the engine produces a growling noise, and the NVH levels aren’t the best in class either. While the sound felt like the engine was small, its performance did not match the sound output. Maybe a few oil changes would make this engine sound calmer, but it is worth noting nonetheless. The overall characteristic of the engine makes it a perfect choice to be driven on city and highway commutes without leaving the driver unsatisfied.

Increased wheelbase, better creature comforts, capable engine and new design language make the new Celerio look like a good competition in the crowded hatchback segment. Yes, some competitors like the Tata Tiago and Hyundai’s line-up add more features in comparison, but none have the K-series engine dynamics to match their stature. Still, in isolation, the Celerio matched with Maruti’s vast service network is a good budget option for anyone looking to get a new age hatchback with minimal running costs.