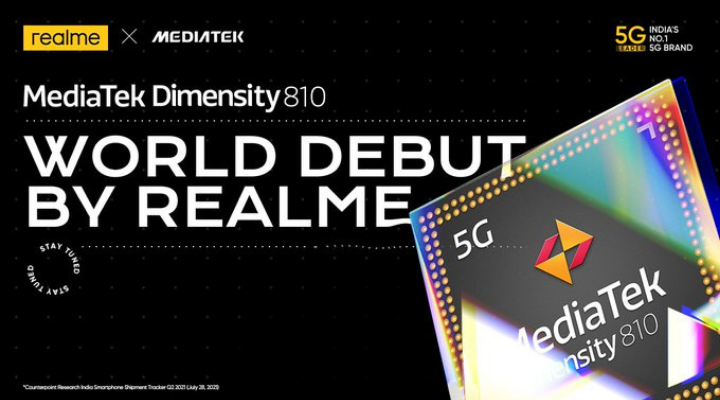 The latest MediaTek Dimensity 810 5G processor was unveiled earlier this month and it can support high-resolution HD+ displays with up to a 120Hz refresh rate and will bring Cortex-A76 CPU cores clocked at 2.4GHz alongside Cortex-A55 cores for power-efficient tasks.

Another First has been added to the long list of #realme!

Our latest Smartphone will be featuring the World's First @MediaTekIndia Dimensity 810 5G Processor for an epic performance.

The company is launching a new smartphone with the latest MediaTek processor and the upcoming smartphone is claimed to provide an all-round experience with faster performance, dual 5G stand-by, and a longer battery. The name of the model is not revealed yet but it is expected to be the Realme 8s.

The smartphone is tipped to feature a triple rear camera setup with a 64-megapixel primary sensor and a 16-megapixel selfie camera sensor. The leaked images of the smartphone suggest that the phone will have a gradient back finish and a rectangular-shaped rear camera module, similar to the existing Realme 8-series phones.