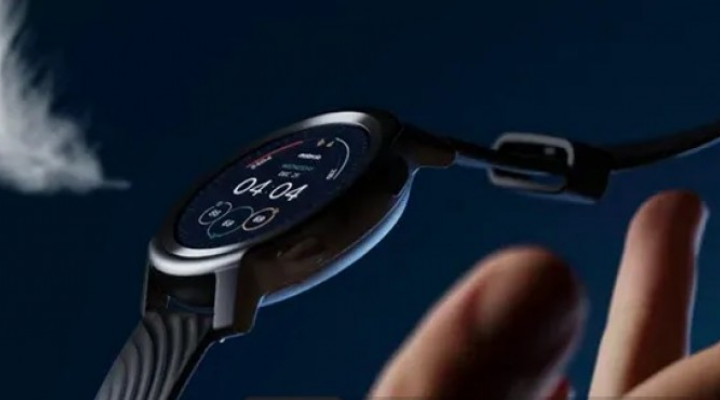 Back in February, Motorola joined forces with Canadian company eBuyNow to launch a smartwatch, and now, a rumoured smartwatch Moto Watch 100 has leaked in new official-looking renders. An investor presentation between the two companies revealed they’d launch a Motorola branded smartwatch next year, but it seems like they’re ready to tackle the smartwatch soon.

The leaked renders show a premium-looking minimalistic design smartwatch sporting a circular display, two physical buttons on the right side and is said to come with a silicone strap marked with a striped design. The watch is expected to run on Google’s Wear OS and feature Snapdragon Wear 4100. Along with features like heart rate monitoring, inbuilt GPS support and step tracking, the smartwatch is expected to feature a waterproof design.

According to the reports, the smartwatch is designed for a budget audience, but it has a premium feel. The leaked renders show the watch in a black finish, but Motorola may launch the smartwatch in various other colour options and straps. Interestingly, in the month of February, the smartwatch was referred to as the “Moto G Smartwatch”, but according to some reports, it might be another watch from the company which they’re planning to launch in the coming year.

The source suggests the Moto Watch 100 will feature a 1.3-inch circular LCD display with 360×360 pixels resolution and is tipped to measure 42x46x11.9mm. The upcoming budget smartwatch from Motorola packs a 355 mAh battery and comes with Bluetooth 5.0 connectivity.

The smartwatch is also expected to feature a heart rate sensor, gyroscope, accelerometer, SpO2 sensor, sleep tracking, sensor counting and ambient light sensor. Unfortunately, the smartwatch doesn’t come with a rotating bezel, and there’s no official announcement from Motorola about the launch of Watch 100 yet, but we expect to witness a launch soon.

In Conversation with Arjun Kapoor | Exhibit