If you’ve been on Instagram for a long time, you’ve seen a gradual change in the social media platform. The social media app which started off as an image-sharing platform eventually became a confusing mix of photos and videos, then the story format staple to Snapchat crawled its way to Instagram, and finally was Reels which was nothing short of a blatant rip-off of TikTok. Right now, it is visible that Instagram is focussing more on becoming a video platform as more and more short-form video creators make their way. As a way to merge its video products into one, Instagram has announced that Stories under 60 seconds in length will no longer be split into 15-second segments.

An in-app alert was recently posted by social media expert Matt Navarra on Twitter which showcased Instagram’s new story update. The alert read ‘Videos up to 60 seconds long will no longer be broken up into segments.’ Whenever users will update their application they’ll get a notification stating that their Instagram stories will no longer be sliced up into small segments, making it an interruption-free viewing experience. This ultimately benefits the users as they won’t have to tap a story away or move on to another story quickly if they’re not interested. 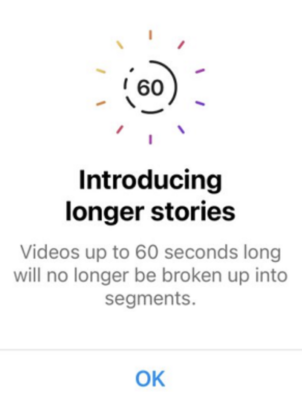 Instagram has been testing out this new feature for a while with select users. It was a part of the Meta-owned platform’s process to integrate broader video options for users. It was back in October 2021 when Instagram retired its IGTV brand and combined IGTV and feed videos in one format. Whereas, back in July Instagram announced that all videos posted under 15 minutes will be uploaded as Reels. The change in story duration to 60 seconds is not exactly a surprising change. Instagram’s head Adam Mosseri had shared back at the start of the year that the platform will be doubling down and prioritizing its video.

The platform disappointed its users when it rolled out a TikTok-Esque full-screen feed. Users were vocally disappointed with the full-screen Instagram feed which forced the company to go back on the controversial change. Looking at the popularity of video-sharing platforms it is understandable that Instagram is adamant about being one. But it’s yet to be seen if users are interested in another video-focused platform.