What is it all about?

Since the onset of the pandemic, facemasks have become the new norm when going out in public but donning them represents its own sets of challenges.

The second-generation LG PuriCare comes with added tech, in addition to being smaller, lighter at 94g, and a much more efficient motor. It features dual fans that control airflow automatically by sensing the user’s breathing patterns to enable easy breathing. According to LG, the mask can be worn comfortably for up to 6-8 hours, while its 1,000mA recharges in 2-3 hours with the included Easy Charge USB cable. The new LG PuriCare comes in a compact form package. Inside the box are two PuriCare HEPA filters, a packet consisting of 15 inner covers and a face guard packed in separate packaging. The design of the wearable air purifier is cleaner and more streamlined and makes it comfortable to wear. The smart, ergonomic design was designed to fit any face. It fits and seals the face, comfortable for everyday wear while minimizing air leakage. It also uses medical-grade silicone that has been checked for safety. However, you’ll start to feel the strain of wearing the purifier after an extended period of time.

The LG PuriCare needs to be charged before you can start using it. It takes about two to three hours to fully charge up the device’s 1,000mAh battery. LG says that you can use the PuriCare for eight hours on a single charge, and based on real-world usage, we got about six hours of usage before plugging in to recharge.

Once the assembly is complete, the PuriCare can be turned on using the power button at the bottom. The fan inside the mask starts to kick in only when you inhale, as there is a respiratory sensor. It detects the cycle and volume of the wearer’s breath and adjusts the dual three-speed fans accordingly. The fans automatically speed up to assist air intake and slow down to reduce resistance when exhaling to make breathing effortless. You can even change the fan speed via the mobile application. 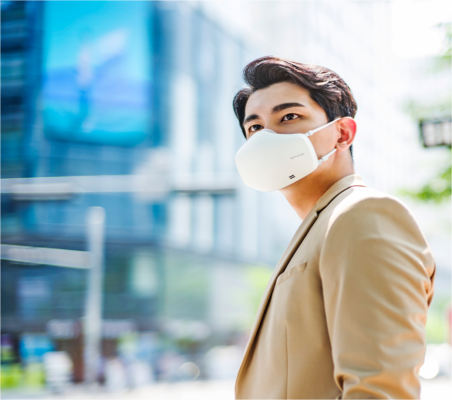 From a purely functional standpoint, the LG PuriCare Wearable Air Purifier makes for a highly effective solution that directly addresses several of the traditional pain points seen when wearing normal surgical or fabric masks. Its application is more suited for individuals who suffer from breathing problems as it aids in purifying the polluted air. It makes breathing easier and is more comfortable to use while the VoiceOn feature helps with social interactions but the cost of expendables and the initial high cost of entry may be daunting factors. If your budget permits, this is definitely something worthy of consideration.

Bad: 1000 mAh battery lasts less than 8 hours before having to be recharged.

A little bulky over the face