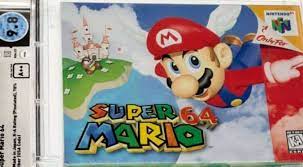 This month has been all about games! Earlier in April, a copy of Super Mario Bros. was auctioned for $660,000. On July 9th, a sealed copy of the Legend of Zelda was sold for a staggering price of $870,000 at Heritage auctions.

Just two days after the Legend of Zelda was sold for a whopping price, Super Mario 64 got sold for $1,560,000 at auction. Now it seems like this is not the only game that will stop at a million-dollar sum.

Chris Kohler, Editorial Director at Digital Eclipse, that works on rereleases of classic video games, said in talks with The Verge.

More than half of the Americans turned to video games during the pandemic and this has been the reason why classic games are gathering huge popularity.

People have found a new hobby of collecting top-notch games whose supply is comparatively lower than it is in other collectable markets. Sonic the Hedgehog and Sega Genesis could potentially hold the most valuable game’s title in the near future.

Deniz Kahn, President and Founder of Wata Games, the company behind evaluating both The Legend of Zelda and Mario 64, quoted:

“Over the last few years there have been a lot of people who started collecting other areas like comics or coins or cards, and their markets are very mature. People in the gaming hobby – collectors, investors –  we’re all realizing that the population of these sealed games are so incredibly low when you compare them to, say, sports cards or comics. There aren’t hundreds of these in high, perfect grades out there. In some cases there’s one, or ten, or just five.”

Khan said that five-figure video game sales were a big deal four or five years ago, and maybe just 10 guys knew about it. It all happened behind closed doors.

Pokemon Cards have been a popular collectable for years. NFTs, a digital collectable has also sold for millions of dollars. People have started to put their money into assets like Cryptocurrencies and GameStop’s stock.

Here are a few games that hit the ‘expensive’ milestone: