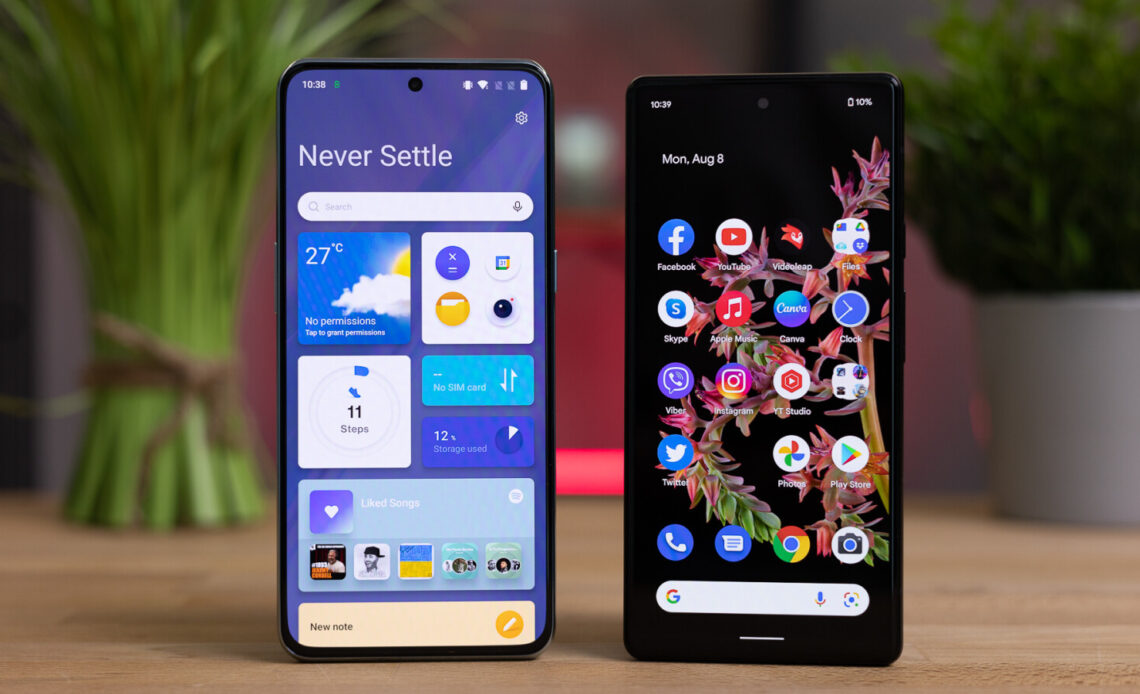 Most of us already use phones, and the upgrade cycle seems like a constant change we all must endure. Either the phone gives up, or you are simply bored of using something daily that feels dated! If you are in the market with a midrange budget and want something different from most others, your options are still plenty. We have three amazing new phones, all launched a few months ago and all of which have received their share of OTA updates. Contenders demanding your hard-earned money are as follows.

Google Pixel 6a – The first phone in India to officially get the Android 13 update, albeit with beta program enrollment.

Nothing Phone (1) – The first phone from Nothing and one of the most astonishing phones money can buy.

OnePlus 10 T – OnePlus’s latest offering cuts the costs associated with additional hardware while providing a sensational nostalgic experience of the OnePlus from the past.

Disclaimer – All these phones are different from one another. From their choice of chipsets to hardware and software, these are one of the only phones with a bloat-free near-stock Android experience out of the box.

Pixel 6a – I love the form factor, and with the clever use of good-quality polycarbonate plastic at the rear, the phone feels lightweight. The front glass is Gorilla glass 3, one of the best iterations of Gorilla glass, to be honest.  The camera bump is less pronounced compared to most phones. The emission of a headphone jack feels unnecessary but encourages wireless audio accessories. Overall the Pixel 6a form factor and feel are second to none, and adding the IP67 rating; this phone is built to age gracefully.

Nothing Phone (1) – Interesting looking smartphone, isn’t it? The overall silhouette resembles an iPhone 13 pro max, albeit with lighter weight in comparison, and a whole conversation starter of a rear. Getting a call with the Glyph interface is like enhancing the flashlight effect on most phone ringtones and amplifying it to the next level. The edges are smooth, and the overall feel is sturdy and dense though slippery. Unlike most phones, this phone does not get an oleophobic coating on the touch Gorilla glass 5. The transparent back is an eye-catcher, and cases with lights shining through add to the appeal of using this phone. Nothing phone (1) gets an IP53 rating. OnePlus 10T – No alert slider, duck move! The chrome bezels may appeal to bling lovers, while the subtle curves on the camera bump make this design feel like a polished version of the OnePlus 10 Pro. Gone is the hideous text neat the cameras, and this phone feels like an excellent OnePlus reboot with the essentials done perfectly.

Pixel 6a uses Samsung architecture to make their Tensor SoC with an additional Tensor processing unit for the camera, privacy, AI and machine learning. The processor is paired with 6GB DDR5 RAM, and overall, the performance is decent unless you start pushing this setup while gaming. The phone manages to throttle and warm up considerably during long gaming sessions. Other than that, the Android 13 update has improved the overall experience on the Pixel 6a by many folds. The battery drain is now optimised when idle, and currently, the phone manages a day with ease.

Up to 12GB DDR5 RAM powers nothing Phone (1), and the Snapdragon 778+ is a balanced mix of performance and stamina. The phone has gotten almost six updates since our time with the phone, and the overall UI, camera performance and gaming performance have only improved over time. Excellent work, team Nothing!

OnePlus 10T – Hell yeah! This is the OnePlus that most OnePlus fans were waiting for! Flagship internals paired with decent above, average hardware makes the 10T an excellent choice for someone who wants to best of Snapdragon 8+ Gen1 in a relatively budget package. Games run at top levels of graphic fidelity with smooth and overall operations are snappier than ever before. Camer processing in low light takes a couple of seconds, making it an excellent phone for performance lovers. Also, this is the only one of the three that comes with a charger, a freaking 150W charger that charges 0-100% in less than 20 minutes. Pixel 6a lacks charging versatility with only 18W charge capabilities and is adamant about using good cables and chargers. Nothing phone (1) charges at 45W! In daylight, all these phones click amazing pictures with rich details, OIS and EIS goodness with good contrast and saturation. The ultrawide sensors are also pretty decent on all the phones. The Pixel wins hand down on most post-processing thanks to Google algorithms. The thing to note is that in low light conditions, the Pixel viewfinder is noisy AF. Still, post-click image processing does wonder! Both the Nothing Phone (1) and the OnePlus 10T use the same Sony IMX766 sensor, and this sensor is no joke. In fact in low light, the sensor beats the 12MP sensors of the Pixel 6a in pure details thanks to added information with more megapixels.

All three phones appeal to different target audiences. If you already use the iPhone and want a decent Android phone as your second phone, the Pixel 6a, with the absolute best of Google and Android, is a great option. The camera sensors are tried and tested 12MP sensors found on the Pixel 5 series with years of algorithmic trickery, the phone is relatively compact, and an additional magic eraser in the photos app makes editing images a breeze. The Internet has proven this to be a 90Hz display with a 60Hz lock for system stability. Maybe a future OTA update might unlock a smoother refresh rate.

The OnePlus 10T is an example of the quintessential OnePlus of the past. It does away with things that add to the price while performing like a flagship smartphone of this era. Let’s not forget that the 10T packs hardware rivalling the best smartphone worlds at a relative midrange price. For gamers, this is the phone of choice and being the largest proves to be a great multi-media companion. The Nothing Phone (1) brings a cool factor to midrange smartphones and, at this price, is one of the only ones that get wireless and reverse wireless charging. The iPhone-like wrapped OLED display is top-notch and makes for a fantastic smartphone experience. You cannot go wrong with either of the phones in this era. Let us know your favourite among the three and which one would be your weapon of choice.