Time machines exist! They’re popularly known as telescopes. NASA’s new space telescope can see through time, and we just got our first images from billions of years ago. These are the very first images captured by the James Webb space telescope, the deepest we’ve seen into the universe with alien planets, far-off galaxies, and the birth and death of distant stars, but this is just the start. We are going to break down everything you need to know about the James Webb space telescope. From those first images to how it uses infrared light to see the past and what it could teach us about the universe? On the 12th of July NASA released the first five images from the James Webb space telescope showing us the most profound and most detailed look into our universe ever. The first big reveal was Webb’s first deep field, an image of thousands of galaxies 4.6 billion light years away. This is the furthest into our universe we’ve ever seen, and all that detail is in an area of sky as big as a grain of sand. Next up, we saw science data spectroscopy from an exoplanet captured when it passed in front of a distant star. This data shows us evidence of water on an alien planet a thousand light years away. Our third image was the stunning southern ring nebula. A dying star 2500 light years away captured by two instruments on the telescope NIRcam and MIRI (Mid-infrared instrument). It shows shells of gas and dust ejected from a dying star. Next was a group of five galaxies called Stephan’s Quintet. This is Webb’s largest image yet, with more than 150 million pixels showing us what NASA calls a cosmic dance of galaxies, stars being born and even outflows from a black hole. And finally, the most phenomenal image of them all, the cosmic cliffs of the Carina nebula. This stunning vista reveals new details about this vast stellar nursery for the first time.

We’re seeing brand-new stars that were previously completely hidden from our view. In this view, we see some great examples, of the hundreds of new stars that we’ve never seen before. We see examples of bubbles and cavities and jets that are being blown out by these newborn stars. We even see some galaxies sort of lurking in the background. Up here, we see examples of structures that, honestly, we don’t even know what they are! What’s going on here? The data is just so rich! These spectacular images really represent the dawn of a new scientific era, one powered by the world’s most powerful telescope. What is the James Webb space telescope?

Well, it’s essentially a giant observatory orbiting the sun a million miles away from earth that examines space through infrared light after decades of development by NASA’s Goddard space flight centre, the Canadian space agency and the European space agency. It was launched from French Guiana on Christmas day in 2021. It’s on a decades-long mission to look at our whole universe. This telescope was initially designed to look back in time and see the very first galaxies that were born after the big bang. We’re talking about looking back in time over thirteen and half billion years into the past. It will study how galaxies change throughout cosmic history. We’ll learn more about how stars and planets are born. We’ll learn about exoplanets, planets orbiting other stars, and then we’ll also learn about objects within our own solar system. This fantastic new telescope is really going to be able to study our universe from our sort of own cosmic backyard of the solar system all the way out to the most distant objects in the universe and everything in between space and time.

The telescope orbits the earth around the sun in a fixed position on the dark side of our planet; staying away from the sun which is very important for its mission. Its sensitive instruments are on the hunt for infrared light, which is essentially heat energy; that’s the reason behind that massive diamond-shaped sun shield the size of a tennis court. The telescope collects infrared light from space using its giant honeycomb-shaped mirror, which is covered in actual gold! Why infrared light? Well, infrared is the key to seeing distant parts of our universe, and that’s because of the way those light waves travel through space. The fact that the universe is expanding all the time and accelerating, thereby as light travels through space, that expansion of the universe literally stretches the light waves. Light waves that are longer in length stretched out show different waves and so are the most distant galaxies, the ones we’ve never seen at all. They’re so far away, their light has been stretched so much that it no longer appears in the optical at all. It’s all in the infrared. Hence, to see into deep space we need to observe those infrared light waves. The light waves that James Webb can see have travelled a long way from 13.6 billion light years away, to be exact in deep, deep space.

This is where it starts to get very cool because the universe is so large by the time this light reaches us from that distance, it’s taken billions of years to get here. When we see the light from that far away, we actually see 13.6 billion years into the past. As astronomers often say, telescopes are time machines, and that’s actually true.  We’re able to see into the past with telescopes, and the reason for that sounds very dramatic and sci-fi, but it’s actually based on the straightforward fact that light takes time to travel through space in the same sense light from the sun takes about eight minutes to get to the earth. So you’re seeing the sun as it was about eight minutes ago, and it’s because of this simple nature of the way light works that we’re able to look back in time and see how the universe was in the distant past. And by that, we can sort of put together a story of how the universe has changed over the last 14 billion years of cosmic history.

How far can we look back into our past?

How does this telescope time machine actually capture this ancient light? Well, the primary way is with the near-infrared camera or NIRcam built by Lockheed Martin Space in silicon valley. It’s like any other camera, except it’s way more complex and it sees invisible light. The whole optics to collect that light is quite a bit of departure from a little lens that we would have on a regular camera. It’s more based on lenses that let the light through and then modify the light in a particular way. Navcam has several different filters. So it doesn’t look at just infrared or just one wavelength; it is a range. We have a number of filters that allow you to look at the different regions of this spectrum to extract even more information than just a simple image. One of the big benefits of measuring infrared light is that NIRcam can see through clouds of dust and space things that would normally block visible light from reaching us. This helps scientists find whole galaxies that might otherwise be hidden.

We saw that with James Webb’s predecessor, the Hubble space telescope, and now we’ll be able to see even more. NIRcam can also do what’s known as Coronography. Essentially blocking light from bright stars to get a better view of the planets orbiting them, and it can measure the way the light from stars passes through the atmospheres of alien planets. All of this could potentially help us find habitable planets. Coronography is all about what’s the composition of these planets, and what’s in their atmosphere. Potentially can we find carbon or water traces and so on, which don’t prove that there’s light, but these are the building blocks for life. There are three other instruments alongside NIRcam on the telescope – MIRI captures longer wavelengths of infrared light. Then there’s NIRspec (Near-infrared spectrograph) which has tiny mechanical shutters that open and close to collect data on things like the temperature composition and mass of distant objects. Finally, there’s NIRISS (Near-infrared imager and slitless spectrograph) and the FGS (Fine guidance sensor). NIRISS observes planets around bright stars by diffusing the light of the stars over a lot of pixels while the fine guidance sensor keeps Webb perfectly steady in space. 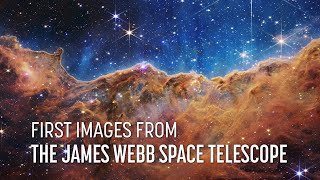 The big question is, why is the James Webb space telescope such a game changer? Well, unlike Hubble JWST can see further and dig deeper into the origins of space. Its light-collecting mirror is six and a half meters wide compared to Hubble’s two and a half meters. All that light collecting power means it can look further back in time seeing fainter and more distant objects capturing more data, and taking us closer to the very origins of our universe. As for what’s next, well, the first batch of images took just five days to capture, and NASA says the telescope could have enough fuel to last for 20 years. 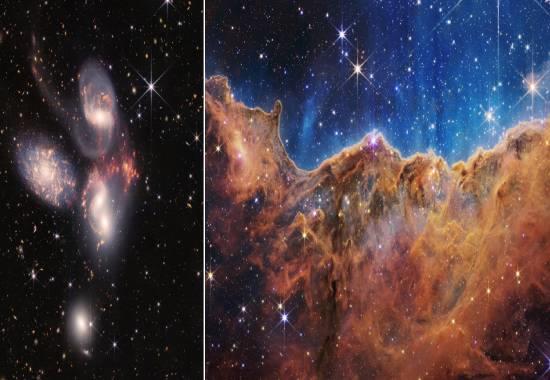 So, this is just the beginning. We can expect more discoveries, more unknown galaxies and more beautiful images, letting us peek deeper into the universe and learn more about the very dawn of time. This first look data that we’re getting shows us the power of this incredible instrument in terms of really our next big step in our search for life in the universe. We think the most exciting thing about this incredible new telescope is the idea that there are surprises in the universe. To say that this is a pivotal moment in the history of science is an absolute understatement. We are about to look into the past further than we’ve ever seen before and that thrill itself makes up for this $10 billion gold-clad space telescope.